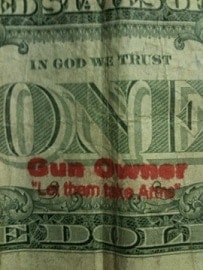 Contrary to what you might think, writing or stamping things on paper currency is perfectly legal — assuming of course that you don’t try to make that $1 bill look like a $10 bill. You could follow the trend if you like, but just don’t get into counterfeit territory and you should be OK.

This idea is pretty simple: stamp every dollar bill you get with a pro-gun slogan and that should advertise your message to every other person who holds it. It’s like free and anonymous advertising.

As clever as the idea is, though, we’re not sure how effective it’d be. We’ve all gotten a dollar bill with something odd scribbled onto it. Some of you have probably gotten one of those “Where’s George” bills. But here’s the thing: if advertising a message on dollar bills was effective, people would already be doing it.

An even more disturbing possibility is that these stamped dollar bills actually catch on and people realize how effective this strategy is. If that happened, every dollar bill you ever get from then on would have the stamps of 20 different companies spread across it. “George Washington loves McDonalds!” “Spend me at Wal-Mart!”

But who knows? Maybe these bloggers will team up with the likes of Washington, Lincoln, and Franklin to create a truly groundbreaking gun rights movement.