The Mexican ambassador to the US, Arturo Sarukhan, dismissed claims that Mexico is secretly plotting against the Second Amendment. Or, to be more accurate, he called the whole idea “gobbledygook,” which is both Español and English for “such a load of bull.” Though, using this highly technical and official term to describe the problem has done nothing to solve the debate. If anything, it’s just fueled the fire.

Sarukhan and other Mexican officials aren’t thrilled about the influx of guns into Mexico. Last month, the Bureau for Alcohol, Tobacco, Firearms, and Explosives reported that 68,000 of 100,000 guns seized south of the border came from USA, a number that has increased dramatically over the past several years. Considering the 2004 lift on assault rifle bans in the US, Sarukhan remarks, “You don’t have to be a rocket scientist to understand why this has happened.”

Some US politicians are siding with Sarukhan on this issue. Rep. Sheila Jackson Lee (D-Texas) said, “We need states rising up as well, recognizing the damage that they’re doing, in conjunction with the federal government.”

Rep. Adam Schiff, (D-Calif.) added, “Imagine the situation in which tens of thousands of Americans were dying from weapons that were smuggled into our country from our neighbor. It ought to be easy for us to understand how Mexico feels about this illicit gun trade.” 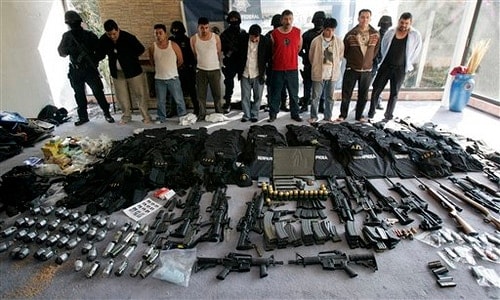 Gun rights organizations have been undaunted by the accusations. NRA spokesman Andrew Arulanadam said, “There’s finger-pointing at America but no mention of the corruption so pervasive in Mexico.” A representative of the National Shooting Sports Foundation, Lawrence Keane, argues that the US isn’t responsible for a Mexican problem: “Restricting the Second Amendment rights of Americans is neither an option nor a solution to Mexico’s internal crime problem.”

In any event, we’ve heard it from the horse’s mouth. Even though Mexico clearly has a motive to restrict the Second Amendment, they’re apparently OK with leaving it as it is.