The Israeli Defense Force (IDF) has discovered a new tank warfare technique that will dramatically increase its firepower. In a nutshell, the revolutionary new strategy is to let more than one tank fire at a target at a time. Well, we could have told them that much.

To be fair, shooting a tank’s gun is a bit more complicated than that. Previous security regulations required that whenever a company of tanks traveled in a straight line, only the tank in the front of the line would be able to fire on enemies. It does make a bit of sense; after all, you don’t want the guys in back blowing up the guys in front. 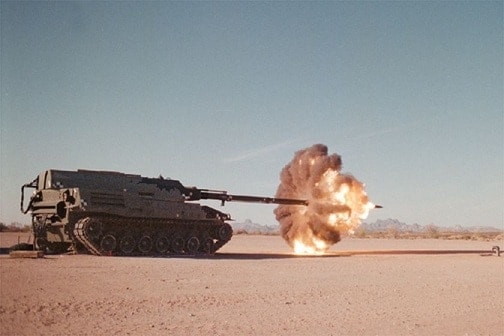 Recent operational tests of an alternative firing technique have found that it is safe to allow tanks in the rear to also fire on a target. Under these new regulations, several tanks will be able to fire on a target, rather than only allowing one tank to shoot. Tanks in the back will fire just to the side of the line so that the explosive rounds hit the flanks of targets. Commander Major Arieh Berger of the Armored Corps headquarters said, “The test was extremely successful and the new shooting technique will be implemented into future training and combat scenarios.”

From here, the IDF is planning to experiment with this firing technique in different scenarios. They want to test it in both urban and mountainous regions, while posted with numerous barriers, and with anti-tank missiles.