Zimmerman Defense Fund Gets Boost, as He is Ordered Back to Jail

On Friday, the Seminole County Circuit Judge presiding over the George Zimmerman / Trayvon Martin case ordered the accused killer of the Florida teen back to jail.

News of the judge’s decision spread quickly and supporters of Zimmerman rallied, flooding his legal defense fund with donations.

Zimmerman’s Attorney Mark O’Mara told ABC News that the online defense fund had been receiving approximately $1,000 a day in donations, but the paced picked up after Judge Kenneth Lester Jr. ordered Zimmerman back into custody.

Judge Lester made the call after prosecutors presented jailhouse tapes of Zimmerman and his wife Shelly allegedly speaking in code about how much money was in the online defense fund before his first bond hearing. 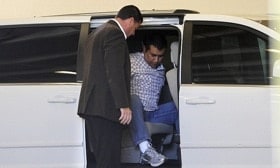 One of the calls reads as follows:

George Zimmerman: “How close am I?”

George Zimmerman: “Really? So total everything how much are we looking at?”

During the first bond hearing, Shelley told the court under oath that the family had no money, but account statements indicated otherwise – a fact that the Zimmerman defense team admitted.

“While Mr. Zimmerman acknowledges that he allowed his financial situation to be misstated in court, the defense will emphasize that in all other regards, Mr. Zimmerman has been forthright and cooperative,” Zimmerman’s defense team said Monday on its website.

On Friday, when Judge Lester Jr. revoked Zimmerman’s bail, he blasted the 28-year-old for misleading the court.

‘Mr Zimmerman can’t sit back a potted palm and let his wife testify falsely before the court when he knew well in advance of the hearing the amounts of money in controversy,’ said Judge Kenneth Lester.

‘He can’t sit back and obtain the benefit of a lower bond based upon those material falsehoods.’

Florida’s Rules of Criminal Procedure allow a judge to revoke a defendant’s bail if he finds there’s ‘good cause’ to do so.   Apparently, this particular misstep suffices. 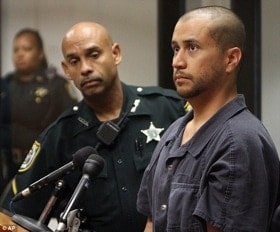 Looking ahead, Zimmerman’s attorneys plan to file a motion asking for a new bond hearing, but the filing has been delayed, his lawyers said Tuesday (today).

“Mr. Zimmerman’s legal defense team has decided to delay filing a motion for bond,” the defense team said on its website, GZLegalcase.com. “A hearing will not be scheduled for a couple of weeks, and we will file a motion well in advance of the hearing.”

The filing was delayed for several reasons, lead defense attorney Mark O’Mara told CNN, but he did not elaborate on the specifics.

“The revocation of bond, I hope, is temporary,” O’Mara said. “I hope that they will give us a day in court to explain George’s behavior and look at all the circumstances … in determining what (Judge Lester) is going to do about letting him back out on bond.”

But attorneys for Martin’s family are hoping that this creates credibility issues for Zimmerman’s defense.

“Zimmerman’s credibility is key in the case,” said Benjamin Crump, “as it is only his version of the facts that say Trayvon Martin attacked him. All the objective evidence suggests that he pursued and shot Trayvon Martin in the heart.”

Moreover, they’re hoping that because Zimmerman waved his right to a speedy trial, he sits in jail until it begins – which might not be until sometime next year.

“If Trayvon Martin had lied to the court, we believe he would not be given a bond,” Crump said. “He would have to sit in jail until his trial, and all his parents have asked (is) for equal justice.”