Israeli Weapon Industries (IWI) has unveiled its new line of grenade launchers. They’re perfect for warfighters who want some more bang for their buck, or marksman who like to hit their targets and then blow them to smithereens.

What makes this weapon add-on so great is that it is so incredibly versatile. It is compatible with all types of assault rifles, and the stand-alone design allows it to still be fired after it has been separated from the weapon. We’re not going to go so far as to say that they duct taped a grenade launcher to a gun, but – actually, who are we kidding? That’s pretty much exactly what they did. 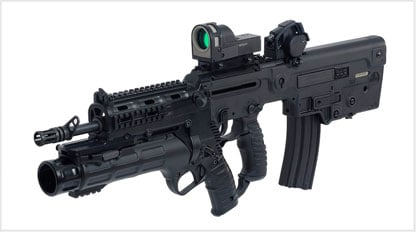 The grenade launcher, which fires a single-shot 40x46mm grenade, attaches beneath the barrel of an assault rifle. They actually look a bit obscene when they’re all hooked up. This might be how baby guns are made.

The GL40 has a couple of other nifty features that will make it a tempting choice. Its simple design enables it to be easily disassembled and reassembled without any extra tools, it features a side-opening barrel that allows users to quickly access the grenade and it only weights 3.1 pounds.

Uri Amit, the CEO of IWI, boasted, “Our new grenade launchers are the result of conclusions drawn from existing launchers – and the needs that arose from the field for a launcher that was easy to use and disassemble by the individual soldier, lightweight, and high performance – ensuring highly accurate firing.”