Detonics, manufacturer of innovative, modular 1911s, is working on something very different, at least for them. Their upcoming DTX pistol is a striker-fired, aluminum- or polymer-framed service pistol with absolutely no relation to the 1911. It does share certain aspects with another prominent striker-fired service pistol, at least in the looks department; the DTX looks like a Glock. Only at a first glance; it actually appears to have more in common with Steyr handguns.

Mostly it’s in the grip angle, and in the finger grooves, but also the takedown pin. The DTX is a result of studying how people stand and move when they are in a fight-or-flight state. “While avoidance and training can deter some of the affects of the SNS, the fact is that 90% of all firearms encounters are at night, within 20 feet or less, and the attack is spontaneous [and] the victim has no warning. Under these conditions, the SNS triggers physiological responses to enhance information about the predator and survival.” 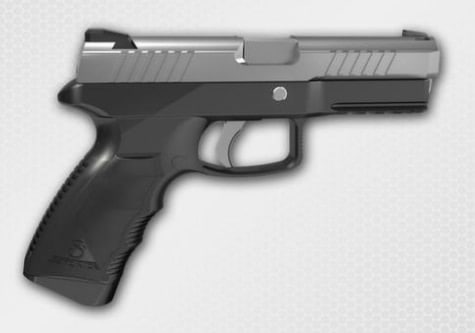 The sympathetic nervous system (SNS) is what takes charge when a person is under extreme stress. It’s your reptile brain, and apparently, your inner reptile likes an aggressive grip angle. Working with what we know of how humans change in life-or-death situations, they’ve developed the DTX to be optimized for how people move, stand, and see when their SNS takes over. What they’ve developed is a handgun that includes:

Right now, they’ve only released their guidelines and the single rendering. But they are sticking closely to their plan, as the DTX will only have 32 parts. That doesn’t sound too unreasonable as Steyr pistols are also very simple. We look forward to seeing how they’ve reinvented the sights, too.

The remaining specifications of the DTX are similar to other handguns on the market. Chambered in 9mm Parabellum and .40 S&W, the DTX will have a 4.25-inch barrel, be 5 inches tall, 1.25 inches wide and 8 inches long. The DTX will weigh 25 ounces and have a capacity of 16+1 in 9mm and 14+1 in .40. It is a double-action-only pistol and will be available this summer with an MSRP of $1,100. 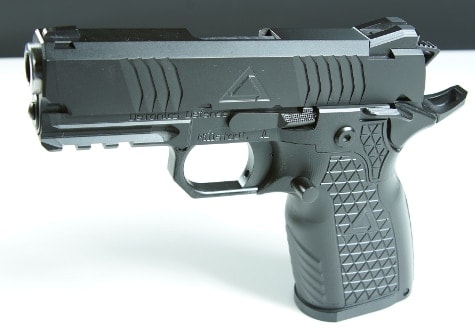 The DTX is far removed from Detonics’ usual offerings. Detonics has always focused on premium and downright avant-garde 1911s like their MTX-H. Still, now is a good time for gun companies to innovate and test new products. It’s just a bit jarring to go from 1911 to, well, the DTX. What would it take for you to consider picking up one of these all-new pistols? Is the Detonics reputation enough?