The task force assembled to review Florida’s controversial ‘Stand Your Ground’ law will use data collected by the Tampa Bay Times as it considers possible changes to the law for next year’s legislative session.

In a statement, Lt. Gov. Jennifer Carroll told the Tampa Bay Times that legislators might need to amend the law to ensure it is applied “fairly and equally” after reading the Times analysis of nearly 200 ‘Stand Your Ground’ cases, which highlighted inconsistencies and called into question the way in which the law is being implemented.

According to the Times SYG analysis, “Uneven application, shocking outcomes,” the law is “being used in ways never imagined – to free gang members involved in shootouts, drug dealers beefing with clients and people who shot their victims in the back.”

Moreover, the Times investigation found that although there was “no obvious racial bias in how black and white defendants were treated overall, people who killed a black person were more likely to walk free than those who killed a white person.”

Yet, even without the Times findings (see charts), the law has its fair share of critics and skeptics.

During the panel’s organizational session last month, Carroll said that “many, many questions” were raised about the viability of the law that removed one’s “duty to retreat” in self-defense cases, particularly ones that occur outside the home. The panel, officially known as the Citizen Safety and Protection, will be holding its first public meeting on June 12 in Longwood, which is a mere 15 minutes away from the site of the Trayvon Martin shooting (the impetus behind the review and investigation of SYG).

In the ensuing months the group will continue to gather information, talk with legal experts, law enforcement officers and citizens to get a comprehensive perspective of the impact the law has had on Florida and its citizens.

The key right now, it appears, is to avoid a rush to judgment, as Rep. Dennis Baxley, an Ocala Republican who sponsored the law, told the Times.

“I think there’s more data to come about the positive aspects of the statute as it exists,” Baxley said, noting to the Times that the law has helped people who were legitimately defending themselves. “It’s hard to do with a fairly small universe of cases to make a lot of judgments about what’s there.”

My sense is that the panel’s overall goal is not to outright scrap SYG (although, undoubtedly there will be individuals angling to do so), but to remove ambiguities and streamline the law and legal procedure to better ensure it is applied equally across the board.

As Lt. Gov. Carroll noted, “I think what’s important is, do we have fairness and equal application for all races, creeds and colors?”

That question, as opposed to, “Should citizens have the right to protect themselves outside the home?” is what the panel is looking to answer.  Thus, I’m cautiously optimistic that the panel will find ways to reduce inconsistencies and mitigate uncertainty without infringing on the rights of law-abiding gun owners. 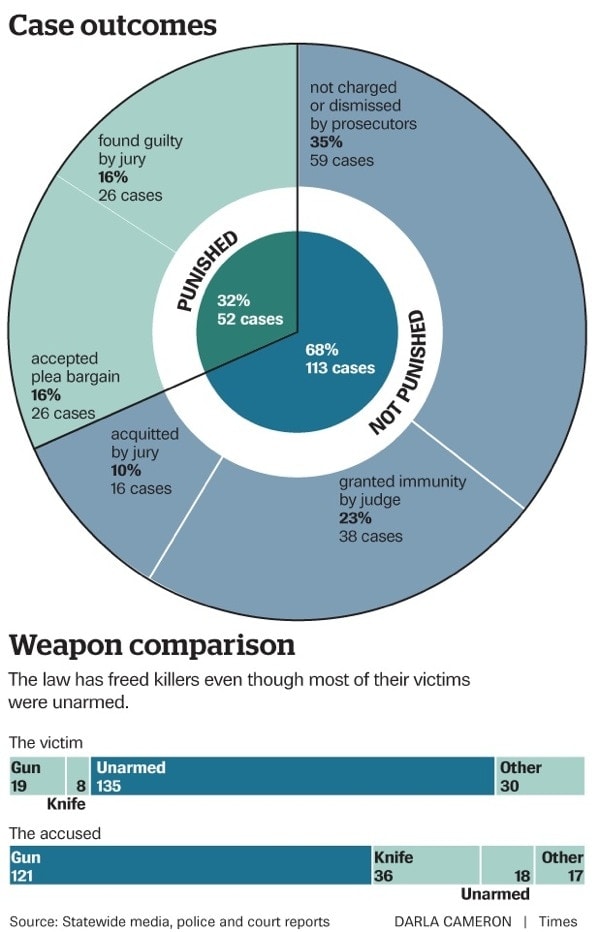