Whew, that’s a mouthful. Those names are all a bit technical, so here’s a much more digestible description of what $97 million will fetch you nowadays. 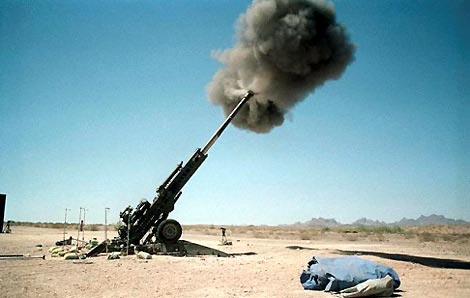 The M865 rounds are used in the Marine Corps’ Abrams battle tanks. They’re training rounds, so they’re designed to simulate shooting at reduced maximum ranges so that tank operators can practice in short-range training scenarios. And you thought firing your Magnum at the shooting range was fun.

Similarly, M1002 tracers mimic the ballistics and flight time of M830A1 rounds when they’re fired from an Abrams.

Howitzers shoot the M1130 rounds, and this ammunition is one of the newest additions to the Army’s arsenal. After enduring rigorous testing they just recently hit the fields in Afghanistan.

The M795 is a hard-hitting artillery projectile that is used with the M777 and the M198 towed howitzers. They’re also used by the M109A6 Paladin self-propelled howitzer.

The vice president and general manager of Large Caliber Ammunition for General Dynamics Ordiance and Tactical Systems, Steve Torma, says that “Our tank and artillery ammunition continue to play key roles in both the training of U.S. forces as well as providing them overmatch capability in combat.”