As the U.S. and NATO Forces Pull Out, China Announces ‘Strategic Partnership’ with Afghanistan

Today, in the Great Hall of the People, Chinese President Hu Jintao and Afghan leader Hamid Karzai announced the creation of a new strategic partnership between the two neighboring countries, a move that comes as the United States and NATO forces prepare to pull out of Afghanistan in 2014.

The announcement was made following a week-long summit meeting of the Shanghai Cooperation Organization (SCO), a bloc organized by China that includes Russia and other central Asian states bordering Afghanistan.

It seems as though the role that China will play in the future of Afghanistan, a nation still struggling to snuff out Taliban insurgents and other Islamic extremists, will be targeted and limited in terms of blood and treasure.

“We will continue to manage regional affairs by ourselves, guarding against shocks from turbulence outside the region, and will play a bigger role in Afghanistan’s peaceful reconstruction,” Hu was quoted as saying in an interview with China’s official People’s Daily newspaper.

Following the announcement of the ‘Strategic Partnership’ China offered a very modest $23 million aid grant for unspecified Afghan projects, a way to, perhaps, ‘seal the deal.’

It appears that, according to experts, China’s interest in Afghanistan consists of two main concerns: (a) China’s internal security and (b) the economic exploitation of post-2014 Afghanistan.

“China’s first concern is national security and to make sure the Uighurs don’t get more strength,” said Yun Sun, a Washington-based analyst specializing in China’s neighbors. “The official line is that the Uighurs get terrorist training in Afghanistan and Pakistan.”

The Uighurs are Turkic-speaking, largely Muslim people in Xinjiang, a province in western China.  China’s worried that the Taliban will embrace the Uighurs, offering them sanctuary and providing them with resources and arms to attack China. 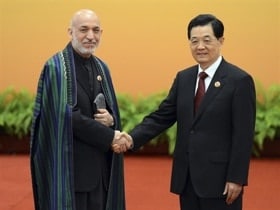 By deepening its ties with Karzai’s regime and by reaching out to regional Taliban leaders, China is hoping that Uighurs separatists find it increasingly difficult to take refuge in Afghanistan.

“Beijing wants guarantees that the Taliban will not give sanctuary or support to the Uighur terrorists should they develop an open presence in Afghanistan after the troop handover,” Sajjan Gohel, the international security director of the Asia-Pacific Foundation, told the New York Times.

Although China is concerned with the Uighur problem, they remain reticent to appropriate any serious cash to improve Afghan security forces (China declined to contribute any money to the $4.1 billion Afghan Army fund) and reluctant to take any direct military action or commit any troops.

By contrast, China has spent billions investing in ways to tap the country’s natural resources.

In December, the China National Petroleum Company signed a deal to explore oil and natural gas in the Amu Darya River Basin.  Included in that deal was the promise that the company would construct Afghanistan’s first oil refinery within three years.

And as the Times pointed out, in 2008, “the China Metallurgical Construction Company invested more than $3.5 billion in the Aynak Copper Mine in Logar Province in Afghanistan, not far from the Chinese border.”

In short, it appears China refuses to do any of the heavy lifting, but can’t wait to reap the rewards.