In theory, Florida’s controversial ‘Stand Your Ground’ law makes perfect sense.  A person should have no duty to retreat if he/she reasonably believes that deadly force is necessary to prevent death, great bodily harm or the commission of a forcible felony, e.g. robbery.

It’s common sense, it’s natural law.  If an assailant tries to kill me, injury me, or steal from me, I have the right to defend myself, which includes the use of deadly force.

However, in practice, Florida’s SYG law is being abused by cunning defense attorneys, misapplied by confused judges and misinterpreted by fallible juries, an article in the Tampa Bay Times reports.

Calling it the most “comprehensive” analysis of SYG to date, the Times identified nearly 200 “stand your ground” cases and their outcomes.  The results of the analysis were telling.

Here are some of the main findings:

• Those who invoke “stand your ground” to avoid prosecution have been extremely successful. Nearly 70 percent have gone free. 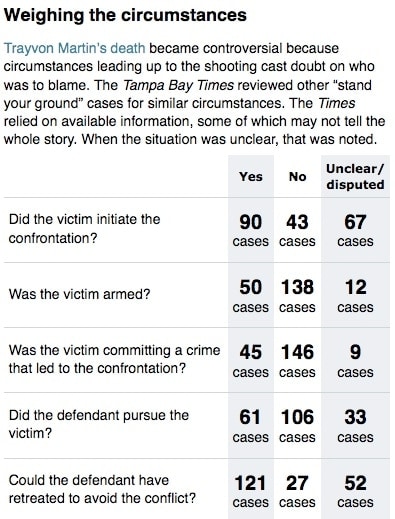 • The number of cases is increasing, largely because defense attorneys are using “stand your ground” in ways state legislators never envisioned. The defense has been invoked in dozens of cases with minor or no injuries. It has also been used by a self-described “vampire” in Pinellas County, a Miami man arrested with a single marijuana cigarette, a Fort Myers homeowner who shot a bear and a West Palm Beach jogger who beat a Jack Russell terrier.

• People often go free under “stand your ground” in cases that seem to make a mockery of what lawmakers intended. One man killed two unarmed people and walked out of jail. Another shot a man as he lay on the ground. Others went free after shooting their victims in the back. In nearly a third of the cases the Times analyzed, defendants initiated the fight, shot an unarmed person or pursued their victim — and still went free.

• Similar cases can have opposite outcomes. Depending on who decided their cases, some drug dealers claiming self-defense have gone to prison while others have been set free. The same holds true for killers who left a fight, only to arm themselves and return. Shoot someone from your doorway? Fire on a fleeing burglar? Your case can swing on different interpretations of the law by prosecutors, judge or jury.

• A comprehensive analysis of “stand your ground” decisions is all but impossible. When police and prosecutors decide not to press charges, they don’t always keep records showing how they reached their decisions. And no one keeps track of how many “stand your ground” motions have been filed or their outcomes.

In looking at these findings, the question becomes how do we continue to protect the self-defense rights of law-abiding citizens while preventing defense attorneys and criminals from abusing ‘SYG’ and fleecing the legal system to their benefit? 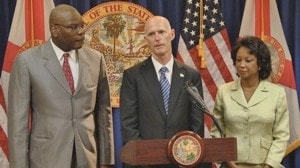 It’s not an easy question to answer.  And as Guns.com pointed out in a previous article, Florida Gov. Rick Scott has assigned a special task force to look into effective ways to answer this question as well as others (the panel is bipartisan, but leans pro-gun).

In the meantime, I think the gun community needs to recognize that there is a problem here.  An objective look at the facts suggests people are taking advantage of the law.

Take for instance what happened in Daytona Beach.  ‘SYG’ was invoked to prevent police from filing charges in two drug deals that resulted in deaths.  Police Chief Mike Chitwood’s hands were tied because the accused shooters had concealed carry permits and claimed they were acting in self-defense.

His statement encapsulates the entire problem.  Sure, one might argue that people take advantage of every law, ‘so what’s the big deal?’

The truth is that because of its nature, ‘SYG’ has a particular, if not exaggerated, effect on gun owners.  If something is not done to mitigate the abuse of the law then our self-defense rights and the concealed carry movement will take a huge hit.

Knowing this, we’re left with the same question of what can we do, as gun owners, to eliminate abuse and keep our self-defense rights intact?