Antavian Edison, Purdue University’s star wide receiver, will not be facing a felony weapons charge, according to news-press.

Back in May, Edison and his uncle were stopped by police while they were driving a car. The police spotted a .38-caliber revolver loaded with 17 rounds of .38 special ammunition, which was hidden between the front passenger and driver se 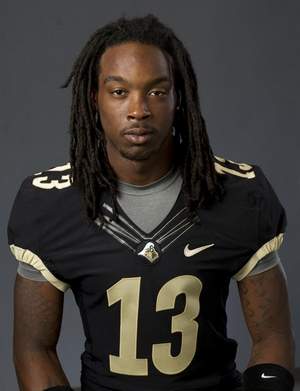 Normally, these charges probably would have stuck, but Edison happened to be driving a borrowed car at the time. Samantha Syoen, the state attorney’s office spokesperson, explained, “The car did not belong to either of them. You have to prove that either of them had the guns before they got in the vehicle, which the state was not able to prove.” Talk about a lucky break.

The Purdue football coach, Danny Hope, said, “We are pleased to know that Antavian’s name has been cleared of any wrongdoing. Those of us who know Antavian always believed it was a case of being in the wrong place at the wrong time.”

That’s good news for the University sports program and for Purdue football fans everywhere. Last year, Edison caught 44 passes for an all-time team best of 584 yards and three touchdowns, and he rushed 30 times for a total of 124 yards and two touchdowns.