Two Australian Olympians, Kenrick Monk and Nick D’Arcy, are getting some negative media attention for posting pictures of themselves posing with firearms at a gun shop.

The problem isn’t so much that the two were posing with guns, so don’t think that this is a piece about rampant gun hate. It’s more that these two swimmers love to piss people off, and now they’re doing it with guns. 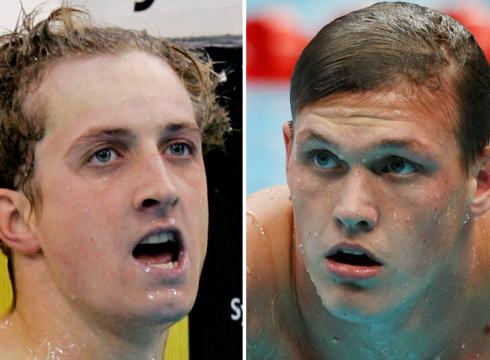 If you couldn’t already tell from the smarmy smiles in the pictures, these two aren’t winning any popularity contests. Nick D’Arcy (left) beat the snot out of one of his teammates at the 2008 Olympic games. Kenrick Monk (right) lied to police when he told them that he broke his elbow because of a hit-and-run, when, in fact, he just fell off his skateboard.

These two may very well have been trying to be unnecessarily inflammatory in the photograph, as some critics suggest. The shotguns resemble those used in the Australian Port Arthur massacre in which a 28-year-old man killed 35 people and wounded 21 others.

John Crook, an Australian gun control advocate, said, “If ever there was a photo of two kids playing macho boys this is it.” The lawyer of the teammate whom D’Arcy beat added, “Despite all the criticism, he still does things that are stupid.”

If these two want to be jerks and make Australians hate them, then that’s fine. Why do they have to drag guns into the mess?