The shootout was put together by Tim’s brother, Mark, to raise money for the Tug McGraw Foundation. The organization aims to provide medical care and support to veterans with traumatic 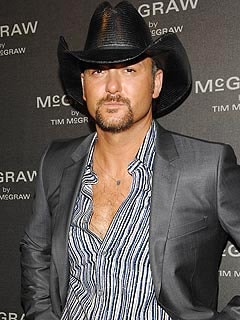 brain injury and post-traumatic stress disorder. The event included a breakfast buffet, barbeque lunch, a silent auction, and of course some clay shooting.

It also included some playful ribbing. People.com reports that McGraw joked, “I’m going to take out Luke Bryan” when preparing to shoot his target. “He’s a Georgia boy, and I’m a Louisiana boy, so I’ve got an advantage right off. But I’m a little rusty, so I’m aiming for Luke’s foot. I think if I can take him out, I’ve got it.”

Other celebs showed up to the event, including Eddie Montgomery of Montgomery Gentry and Mike Fisher, Carrie Underwood’s husband. Fisher put in a good bid for a Baretta rifle that was up for auction, but he missed it by a mere $100. Fisher’s money would have been added to the pot, which totaled $65,000 by the end of the event.

Free food, big-name celebrities, and some good ol’ fashioned clay shooting? By the sound of it, a bunch of Guns.com readers are going to be sad that they missed it.