A Navy sailor earned a spot on the US Olympic shooting team by winning the USA Shooting National Championship in the women’s 10-meter air pistol and 25-meter pistol shoot. 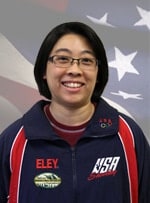 Information Systems Technician 1st Class Sandra Uptagrafft (what a last name) secured first place by teeny-tiny margin of just three points above the second place competitor. Uptagrafft reported, “I struggled through the whole thing. I did not think I made it… so it was a huge relief when I heard the result.”

How humble of her. On that note, she also thanked the 3rd Naval Construction Regiment, which welcomed her on board for a nine-month deployment in Kandahar, Afghanistan. She added, “They have been super supportive of me and my shooting. I’ve received moral support and they were always just really encouraging.”

What’s even more surprising is that she hasn’t received any formal weapon training from the Navy. An information systems technician, as it turns out, doesn’t typically run around with grenades and a high-powered rifle.

Uptagrafft will be training at Fort Benning, which is near her home, as she gets herself ready for the 2012 London Olympic Games. This true servicewoman will have to schedule her training regimen around the base’s operational commitments.

Uptagrafft’s husband, Eric, is a member of the men’s US Olympic shooting team. So, for all you would-be robbers out there, if you ever see “Uptagrafft” on the mailbox you may just want to keep on walkin.’

For updates, stay tuned to Guns.com. For more information on the US Shooting Team, visit their website. For all breaking gun news, keep browsing Gun.com’s news feeds.