FN USA is expanding on their FNS line of new polymer striker-fired service pistols with a competition-minded variant, the FNS-9 Competition.

The Competition is still under development, with the professional shooters of Team FNH-USA as well as world champion pistol shooter Dave Sevigny currently evaluating the handgun.

“From testing at 3-gun matches to precision bulls-eye and action events like this year’s NRA Bianchi Cup, the FN FNS-9 Competition has proven itself to be reliable and effective in competition environments—a testament to the product,” said Ken Pfau, an FNH vice president. “The feedback we receive from the team is an integral part of our product development efforts and we are excited about the feedback already.” 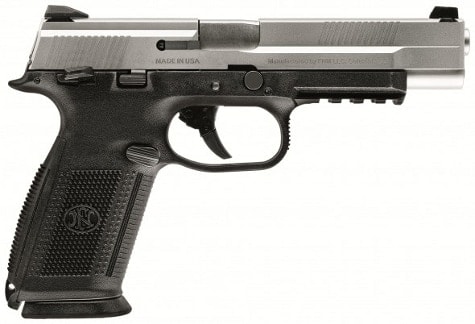 “The new FNS-9 Competition model is light in weight, tracks well shot-to-shot and is easy to stop and transition between targets. The trigger pull on the pistol I shot at this event was greater than five pounds, but it breaks clean and is consistent,” said Sevigny.

Similar to the FNS in most ways, the Competition model will have a lengthened five-inch barrel and according-length slide. The other features remain the same, the automatic trigger safety, the fully-ambidextrous controls and the customizable backstraps.

What makes the FNS stand apart from other striker-fired pistols in particular is the very crisp trigger. It has very little takeup and breaks much more like the trigger of hammer-fired handguns. It also features a very slender grip that can be expanded with squared or rounded backstraps with a very high beavertail. Overall the FNS has a low bore axis which makes it a very fast shooter with little muzzle flip and quick, responsive controls. 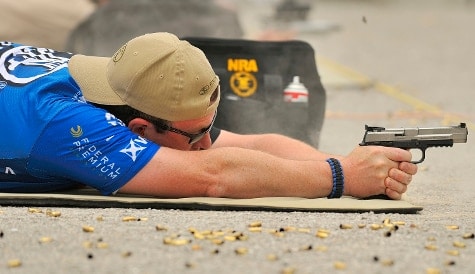 We were extremely impressed with the FNS pistols at SHOT Show this year and look forward to shooting the FNS-9 Competition when it becomes available, which should be around SHOT Show 2013, next January.

Photos of the existing FNS-9 Competition show it with two different sight systems, one a standard set of drift-adjustable fixed sights, and another with tall adjustable target sights. It may be a bit early to be critical, but it would be nice if the Competition comes with adjustable fiber-optic sights, similar to the sights on the XDM 5.25 Competition.

This gun is going to make an impression on the competition shooting world, especially if they can ship it with a lighter factory trigger. However, we hope this doesn’t slow down FN’s progress in making a concealed-carry-friendlier FNS Compact.