This was Holder’s eighth time coming before a group of frustrated Congressional investigators, who thus far have had zero success in prosecuting those responsible for the Arizona-based sting operation since their probe began almost a year ago.

The highlight of this latest round of questioning came when Rep. Jason Chaffetz (R-Utah) called out Holder for lying about internal emails that clearly reference Fast and Furious.

Instead of admitting that his underlings were indeed aware of F&F (well before the details of the operation were released to the public) Holder “noted for the record” that those emails that literally say “Fast and Furious” do not refer to Operation Fast and Furious, but refer to a different gunrunning operation known as “Wide Receiver.” 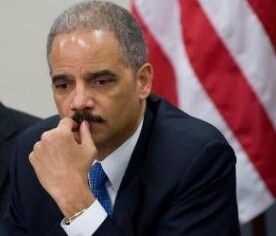 Of the three emails (you can read them all at CNS News), the second one dated “October 17, 2010 11:07 PM,” sent by Deputy Assistant Attorney General Jason Weinstein to James Trusty, stated:

“Do you think we should have Lanny participate in press when Fast and Furious and Laura’s Tucson case [Wide Receiver] are unsealed? It’s a tricky case, given the number of guns that have walked, but it is a significant set of prosecutions.”

It’s plainly evident to any literate individual that the author of the email (Weinstein) is referring to two distinct operations: Fast and Furious AND Wide Receiver “ARE unsealed.”  Yet, Holder, either through profound ignorance or straightforward dishonesty, insisted that Weinstein was referring to a singular operation, WR.

Chaffetz, perhaps stunned by the bald-faced lie he was just told took a moment to gather his thoughts and replied, “No, it doesn’t. It says Fast and Furious. ‘Do you think we should have Lanny participate in press when Fast and Furious and Laura’s Tucson case [Wide Receiver] are unsealed?’ It’s specific to Fast and Furious. That is not true, Mr. Attorney General. I’m happy to share it with you.”

Holder was also asked about the impact that gunrunning has had on Mexico, which has witnessed drug-related deaths skyrocket in recent years.

Rep. Ted Poe (R-TX), queried, “How many people in Mexico have been killed as a result of the U.S. engaging in the gun-walking tactic?”

“I don’t know, but I think there would be some,” Holder said.  He added that over the past five years Mexican authorities have recovered 68,000 guns that have been traced back to the U.S., underscoring the point that Fast and Furious only accounted for 2,000 guns in total, 1,400 of which federal agents actually lost track of.

In the end though, Holder’s testimony last Thursday was what one has come to expect. That is, more ducking and dodging.

One can only hope that Holder’s obvious prevarication on Fast and Furious encourages Congressional investigators to think long and hard about the upcoming vote (June 20) to decide whether the chief law enforcement officer of the U.S. should be held in contempt of Congress.

How would you vote?