Yesterday, the FBI released its Preliminary Annual Uniform Crime Report, January-December 2011, which showed a 4 percent decline in violent crime in 2011, when compared to 2010 figures.  It’s the fifth straight year of declines, which fits a larger downward trend in crime of more than a decade, according to FBI records.

– In the violent crime offenses category, murder was down overall 1.9 percent from 2010 figures, while forcible rape, robbery, and aggravated assault all fell 4 percent.

– There was, however, an increase in murder in the Midwest (0.6 percent) and an 18.3 percent jump in murder in cities with populations of less than 10,000.

– Arson—also a property crime even though its data is considered separately because of various levels of participation by reporting agencies—was down 5 percent overall. 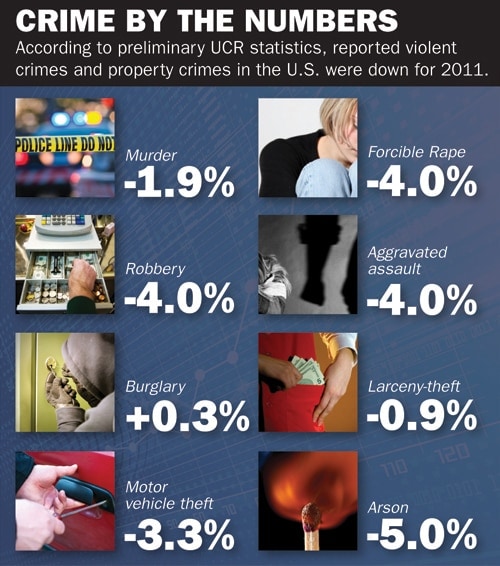 The report does not attempt to explain the stats.  In fact, it goes one step further and warns prospective data users against making any hasty generalizations or conclusions about the tabulations and their relation to certain communities or police agencies.

“Valid assessments are possible only with careful study and analysis of the range of unique conditions affecting each local law enforcement jurisdiction,” it continues.  “It is important to remember that crime is a social problem and, therefore, a concern of the entire community.”

In a similar vein the gun community should exercise restraint in examining these figures.  While gun ownership is on the rise and more people are obtaining concealed carry permits, there’s still not enough evidence to claim that the growing gun community caused the decline in crime.  Sure, it might be a factor, but it’s hard to say for sure.

However, what is crystal clear at this point is more guns in the hands of responsible gun owners does not increase crime.  In this regard, I’m reminded of what UCLA Law Professor Eugene Volokh said when I asked him about whether “More guns equals less crime?”

“Jury is still out on that, since this is a hard question to evaluate empirically.  But it seems pretty clear that shall-issue hasn’t lead to any material increase in violent crime.  And given the value of the right of self-defense (whether or not it’s constitutionally secured), I’d say that the presumption should be in favor of the right to have the tools one needs to defend oneself – and even if that presumption could be rebutted by very strong evidence, no such evidence has appeared.”

In other words, there’s zero evidence to suggest that an increase in gun ownership leads to an increase in crime.  From my perspective, if there’s anything we should be telling the non-carrying, non-gun-owning public, it’s this undeniable fact.