Officially dubbed the Gilboa Snake by Israeli manufacturer Silver Shadow, we finally have some solid details about this double-barreled AR-15-based rifle. Strictly speaking, it’s more of a Personal Defense Weapon (PDW)-type Short-Barreled Rifle (SBR). The Snake is most notable for its twin 9.5-inch barrels and large matching compensators with jagged standoff teeth, but it should be noted that it’s also piston-driven.

The Snake’s proprietary piston system appears to use a single adjustable gas piston. That would make sense from both a weight-saving and space-saving perspective, but it is also necessary to use a gas piston system for the rifle to have one charging handle and to avoid having two buffer tubes. It’s clear that for this rifle to work, Silver Shadow had to clear some significant technical hurdles, as the Snake is fairly far-removed from AR territory. 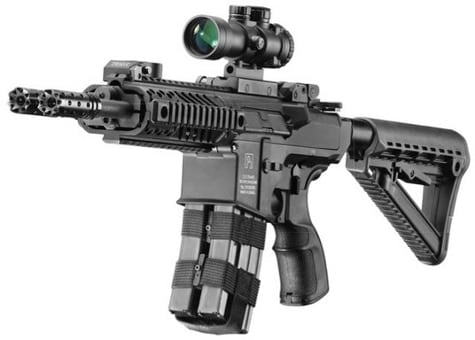 Not that you wouldn’t know that by looking at it. It appears to be two ARs, one standard and one lefty, and this is a manufacturing term, smushed together. Tacticool ARs, too, with a ventilated quad rail wrapped around both barrels and the gas system.

Silver Shadow is far from the first company to develop and manufacture multi-barrel firearms, and we don’t mean support weapons like miniguns. Springfield and Winchester both developed multi-barreled rifles for the US Army after WWII, and before that, the military looked into mass-producing duplex rounds, cartridges loaded with two bullets.

Still, we can’t help but think that the Snake is more of a exercise in manufacturing prowess than it is practical small arms development. Yes, it’s on the heavy side, but we’re sure that when it works, it really works. But we also suspect that when it doesn’t work, your standard malfunction drill isn’t going to cut it. Do we want one? Of course. The ATF may have opinions otherwise, as even in semi-auto we can see how the Snake, legally speaking, qualifies as a machine gun—one trigger pull, two bullets. 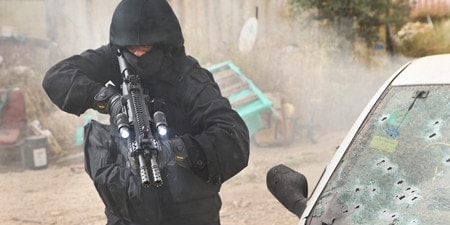 Gun manufacturers do stuff like this from time to time, and no matter how impractical they are, we like that there are people who play with their gun designs. Because even though this is being touted as being twice as deadly, we can’t help but think this is something we dreamed about when we were kids.

You can check out Silver Shadow’s much more practical designs here.