Five of the Coolest Movie Guns of All-time

Though your tastes may vary, it’s pretty safe to say that everybody on the planet loves a good movie and for gunnies, that it especially true if that movie’s actors are sporting some classic iron. Be it a western or sci-fi flick, a crime drama or a thriller, gun owners are often guilty of paying more attention to the action being worked in the protagonists hands than the action unfolding in the story (though the two usually coincide).

But what makes for a memorable, cool and, dare we say, great movie gun? We’ve already looked at movie guns we got issues with, well here’s a few we like; some may surprise you and others we’re sure you know by heart.

For us, if a movie gun has one foot in fantasy, it’s other should be planted in reality.  In kind, we think one of the coolest guns to ever grace the silverscreen has to be the M56 Smart Gun from the movie Aliens. When this modern classic hit theaters in 1986, a weapon like this didn’t seem too far off despite the fact that nobody had ever seen anything like it before and though it didn’t get a lot of screen time, it’s the gun that everyone remembers from the film.

The massive gun was “worn” on the user’s body and was made from a MG-42 machine gun and parts of a Steadycam (the kind used pervasively in the film industry). Part of the gun’s handlebar was actually from motorcycle parts—making for one gnarly looking piece of kit.

In the film, the handheld light machine gun autonomously targeted moving objects via a motion-sensitive auto-tracking system in the users helmet.  Back in the 80s (with technology and Cold War defense spending exploding) such a device seemed totally plausible.  Today, we even use auto-targeting in paintball.

Very seldom noticed (but well remembered by those who did) was the Wildey handgun from Death Wish 3. 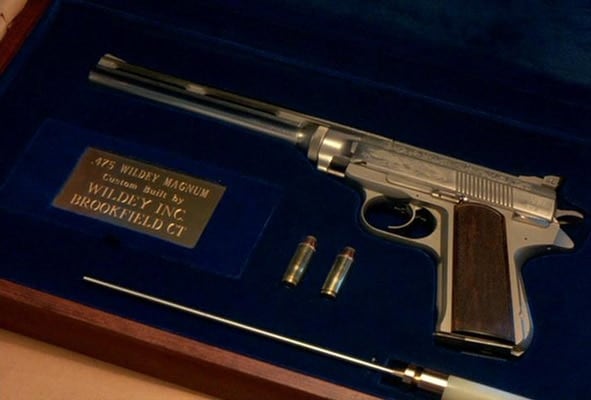 What few people fail to realize though is that the .475 Wildey Magnum used in the film was just as popular with architect turned vigilante Paul Kersey as it was with actor who portrayed him, the legendary Charles Bronson.  It was the actor’s personal handgun.

While some gun-loving movie-goers mistook it for an Automag, the strange looking, streamlined handgun, chambered in what was really intended to be hunting a round, caught the public attention, so much so, that its appearance in the movie is credited with increasing Wildey sales enough to rescue that company from bankruptcy (and “revealing” the rounds potential in vengeance self defense applications). Back in 2005, founder Wildey J. Moore reported that sales continue to spike every time Death Wish 3 is aired on television.

In terms of building a script around a gun, there are few that have gotten the attention that the Shiloh Sharps 1874 did in the film Quigley Down Under. Used for nearly the entire film by film star (and avid shooter) Tom Selleck and constantly referenced either directly or indirectly by the film’s other characters, we found it nearly impossible to take our eyes off of this beautifully made single shot rifle.

This film, while not a huge success at the box office, retains a solid cult following and unarguably did wonders for rekindling interest in Sharps rifles and black powder cartridge shooting.  Today, there are more than a few different versions of the Quigley rifle being offered and, jeez, what’s not to love about a lever-action breech loader that has been converted to use a special .45 caliber, 540 grain paper patched bullet and has a barrel length that is four inches longer than the usual thirty? 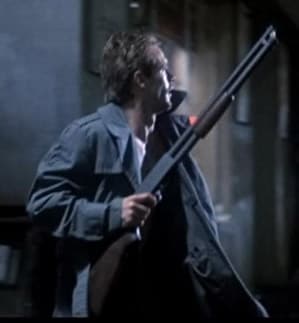 Perhaps the most widely seen gun in movies has got to be the plainest, but like many other character actors, the Ithaca 37 pump action shotgun shouldn’t be remembered for one movie, but rather it’s film career as a whole.

It was used to fight off xenomorphs in Aliens, the T-101 in The Terminator, disguised aliens in They Live, demons in Legion, and has been in dozens of police and crime movies, so many so it would be ridiculous to list them all here.

And we get it. The Ithaca 37 is a gunslinger’s (and a director’s) dream.  With having no interrupter in the trigger the user can hold the trigger back and rack the slide, allowing for that gritty, dramatic just firing away thing great action flicks trade-in. Perhaps only the Colt Single Action Army has been used more in films than the Ithaca 37—but they just don’t seem to be as theatrical anymore.

So what is the coolest gun I have ever seen on film? Dirty Harry’s Smith & Wesson Model 29? No, even though it started a craze and put the .44 Magnum into the mainstream forever, in my eyes, it is still just a Model 29 (and hey, this isn’t the coolest movie rounds).  No, my criteria for the coolest movie gun is that it has to be a one of a kind gun but also one that made me pause the DVD, look twice and say, “What the heck is that?” 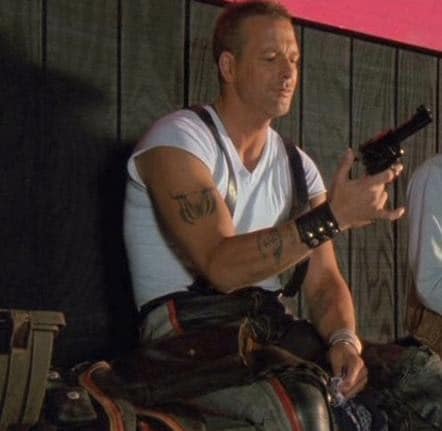 That gun, for me, is the Ruger Super Blackhawk .454 Casull conversion from Harley Davidson and the Marlboro Man.

Some of you are thinking, what?  Well, for a guy that likes well-made revolvers, this gun just exudes cool.  It has the look of a great sixgun, it is chambered in an awesome caliber (at the time, the .454 Casull was the baddest round in a handgun) and it had a beautiful pair of ivory grips. Though that may seem a little unassuming compared to the M56 smart gun, it was the type of gun that, for someone who knew guns, got my attention simply because I didn’t even think such a thing existed and had certainly never seen it on screen before (nor since).

While the film itself was a colossal bomb at the box office, like the Sharps in Quigley, the Ruger Super Blackhawk has helped the movie to gain a cult classic. Indeed, though only one of these guns was ever made for the film, today a Ruger Super Blackhawk in .454 Casull can be had for the money with custom shops like Bowen Arms and Gary Reeder doing a steady business converting Ruger single action revolvers ever since.