Boy, the US Olympic Shooting Team sure has been getting a lot of attention these past couple of days. Of course, that might have something to do with the fact that these 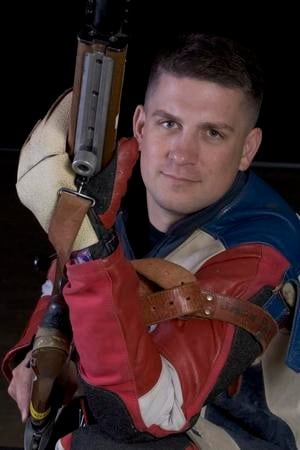 professionals will soon go on to compete and hopefully dominate every shooting competition in the 2012 London Olympic Games (YOU-ESS-AY! YOU-ESS-AY!).

Parker earned his spot on the team by winning the Men’s Three-Position Rifle match. This will be his fourth trip to the Olympic Games. Parker has never won an Olympic medal, but he did win the 2002 ISSF World Shooting Championships.

Parker is eager to try his hand at the gold: “Everybody goes to the Olympics to win a gold medal and I’m no different. That’s the ultimate goal. But my expectations going over there are to compete hard, represent my country well and do my best and train my best leading up to it.”

Luckily, he has an ace up his sleeve that might help give him an edge: his family. Parker explained, “Getting into the finals and looking over and seeing my kids there with a smile on their face watching their dad is an awesome feeling and kind of relaxes me. I am looking forward to having them there in London with me.”

Hopefully, Parker will be able to add his gold to the giant mound of medals that the US invariably rakes in every four years.