About two years after a 19-year-old man was fatally shot and killed by a US Border Patrol agent, Guadalupe Guerrero is suing the agent and the federal government. The AP reports that Guerrero called the incident “an appalling use of excessive force.”

This already sounds like a sticky case, so let’s look at the facts. Border Patrol agent Lucas Tidwell believed that Carlos La Madrid, a US citizen, was carrying marijuana in his truck. The unarmed La Madrid fled the scene and 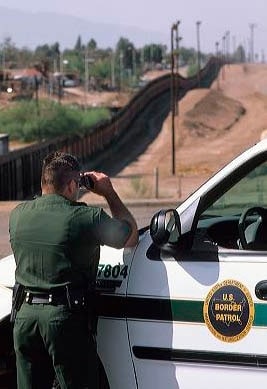 attempted to climb a ladder on the US-Mexico border, prompting Tidwell to shoot La Madrid twice in the back and once in the thigh.

Uh-oh. Bullet wounds to the back never look good. But La Madrid was allegedly carrying illegal drugs, so that’s kind of an extenuating circumstance, right? According to Guerrero, no way Jose.

She argued, “I say he didn’t have drugs, but let’s suppose he did. Let’s suppose he had 40 pounds of marijuana. You think that’s dangerous enough to kill a young boy, an American citizen? Why not send him to jail?”

Rick Gonzales, Guerrero’s attorney in both cases, agreed with the bereaved mother, “It’s a hugely, hugely tragic case. You don’t shoot a 19-year-old kid in the back three times who’s running from you in a marijuana case.”

Guerrero appears to care more about making a point and fixing a flawed system then getting a paycheck from the government. She intends to use the money to start a nonprofit organization to help poor children and wants to hit the government where it hurts: “That’s the only thing the United States government cares about — money.”

Border Patrol spokesman are not currently talking about the case because the case is still pending litigation, according to the AP.  In turn, it is unclear whether or not Tidwell is still serving as a Border Patrol Agent.