Springfield's XD(s) Single-Stack .45 for Concealed Carry Spotted in the Wild

If you’ve been waiting, patiently or otherwise, for a Springfield XD(s) since its announcement earlier this year at SHOT Show, now is the time to start shopping around. They’ve been shipping and are popping up all over the country.

The XD(s) is Sprinfield’s most recent concealed-carry pistol. Similar in appearance to the XD(m), the XD(s) is as different as the XD(m) is to the XD. The result is an extremely compact carry pistol with a capacity of 5+1 rounds of .45 ACP in a package that is just 0.9 inches wide (1 inch at the slide stop and takedown lever) 6.3 inches long, and only 4.4 inches tall. Unloaded the XD(s) weighs 21.5 ounces. 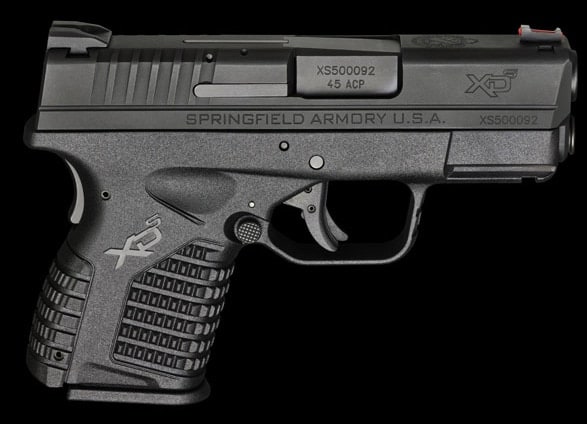 The XD(s) shares all the safety features of the XD and XD(m), including a trigger safety, grip safety, drop safety and out-of-battery safety. All the safeties are passive, ideal for a carry pistol. The only major feature difference is that the XD(s) does not have a striker status indicator. It maintains the guide rod standoff and loaded chamber indicator as well as the XD(m)’s no-trigger-pull field strip procedure.

Shooting the XD(s) is similar to shooting an XD or XD(m). The trigger is the same as the XD(m), and the other controls are located in the same places, but the difference in grip size and pistol weight is very noticeable. The grip texture, at a glance, looks the same as the XD(m) but is, in person, much more aggressive. It does help control the XD(s). 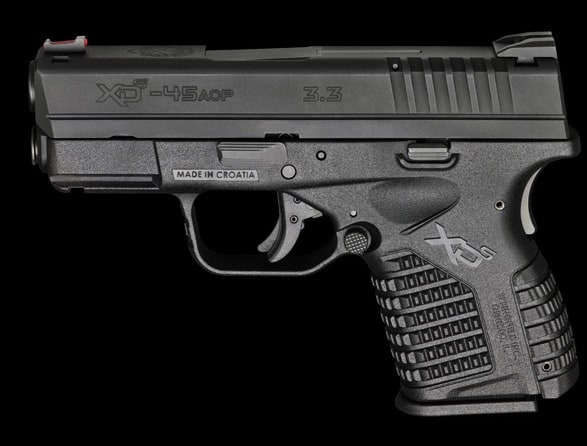 It’s actually very easy to control the XD(s). Despite being chambered in .45 ACP, weighing what it does and providing the shooter with just a two-finger grip, the XD(s) recoils straight back and generates very little muzzle climb or muzzle flip. Granted, you’re not going to want to shoot 1,000 rounds a range session with it, but what you will shoot, if you hold up your end, will all be in the black.

It’s easy to be accurate with the XD(s), despite its size. Again the grip texture really digs in and doesn’t allow for much play in the hand, but also the natural grip angle and very visible fiber optic front sight go a long way to making this a fast and on-target shooter.

Leatham misstates the weight of the pistol at 29 ounces. It weighs 21.5 ounces. He also misses, proving that he is human.

With all the recently-launched compact single stacks of late, including the Smith & Wesson Shield and the SIG P938, the XD(s) still stands out for being chambered in .45 ACP and also for being an XD. The XD series has a lot of fans and this new pistol fits right in with the rest. The XD(s) is being priced between $500-600.