University of Sioux Falls President Mark Benedetto is suing Delta Airlines over an incident last fall that ended with him spending a night in a New York City jail.

According to The Argus Leader, Benedetto was charged with unlawful possession of a firearm after an autumn trip to NYC. His lawsuit claims that Delta breached its duty by failing to inform him of the city’s restrictive gun laws.

First off, it should be noted that Benedetto is not the only individual to be ambushed by NYC’s draconian gun laws.  As it turns out, it happens quite frequently – as Guns.com has reported in the past.

The victims’ stories all follow a similar pattern; Benedetto is no exception.

Essentially it goes like this, a law-abiding gun owner with a valid concealed carry permit from another state travels to NYC.  Unaware of the city’s strict gun laws, he or she tries to do the right thing by ‘declaring’ or ‘checking’ his or her firearm at some point during the trip  (either at an airport, a government building, etc.).

The receptionist or TSA employee or whoever is told about the gun immediately calls the authorities.  The unsuspecting gun owner is then arrested for illegal possession of a firearm and thrown in jail.

On Sept. 28 Benedetto, along with his wife Gail, landed in LaGuardia Airport.  The couple was traveling to the Big Apple to obtain some Sept. 11 memorabilia for a special display at the University. 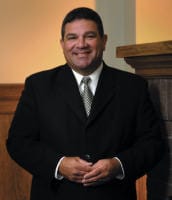 Benedetto, who has a CCW permit in South Dakota, brought with him a firearm, completely unaware of the fact that it is illegal to possess a firearm in New York unless the gun owner is a New York resident with a state and local CCW permit.

After spending several days in NYC, the two prepared to fly back to Sioux Falls.

Back at LaGuardia Airport, on Oct. 2, Benedetto told a ticket agent that he had an unloaded handgun in a locked case inside his checked luggage, as required by the Transportation Security Administration and Delta Airlines policy, his lawsuit states.

“Without warning or explanation, the Delta ticket agent proceeded to notify the New York-New Jersey Port Authority Police via telephone that he had a passenger who had declared a firearm,” the lawsuit says.

Benedetto was promptly apprehended by police and subsequently transported to the Queens Boulevard Precinct, where he spent the night in jail under “horrendous conditions.”

In the ensuing months following the university president’s arrest, the chargers were dropped and expunged from his record.

But Benedetto, was not about to let things slide. “The entire incident was a slap in the face,” Benedetto told local reporters, adding that he felt he’d done what he was expected to do before his departing and returning flights.

Therefore, he feels that he has an obligation to ensure this doesn’t happen to anyone else ever again.

“As someone who has been involved in leadership throughout my adult life, I need to address this injustice and attempt to remedy something that is just plain wrong. Even though the case has been dismissed from a legal perspective to the point where the State of New York has expunged all records pertaining to this event, it doesn’t change the fact that this incident has been devastating to me and life-changing in many ways,” Benedetto said in a written statement.

“While I have no interest in sensationalizing this story through the media, I endeavor to ensure that no other person has to suffer through the indignation that I have endured.”

His lawsuit claims that he was “was subjected to physical, emotional and verbal abuse while incarcerated, that he feared for his safety and that his shoulder was injured when an officer double handcuffed him.”

It charges Delta with negligence, breach of contract, breach of good faith and fair dealing and asks for compensatory and punitive damages of an unspecified amount.

Does the man have a solid case?  Or is the onus on him to research gun laws before traveling?