Testifying before the Task Force on Citizen Safety and Protection, the parents of Trayvon Martin said that Florida’s controversial ‘Stand Your Ground’ law must be amended to prevent defendants who provoke an altercation from invoking the law in their defense.

Tracy Martin and Sybrina Fulton call their proposed change to SYG the “Trayvon Martin Amendment,” after their son who was shot and killed by neighborhood watch volunteer George Zimmerman in late February.

To add weight to their argument, the two brought with them 370,000 signed petitions in support of the amendment.  Before the panel, Tracy Martin gave an impassioned speech about the need to critically review and ultimately change SYG.

“Where does it say in these laws that the neighborhood watch volunteer can chase down an unarmed teen, shoot him and claim self-defense? We’re not against the law. But the law has to be re-evaluated,” Martin told the panel. 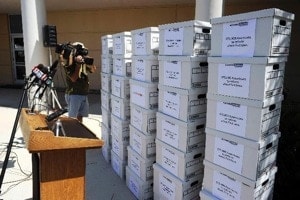 “Basically this law is telling us that it’s okay to be a vigilante in our society,” he added. “Fix these laws so that the law applies to a person who is literally in danger and trying to protect himself or herself.”

Martin finished his testimony by asking the panel to support a “Trayvon Martin Amendment.”

At the meeting, Trayvon’s parents weren’t the only ones to offer testimony before task force members.

A 63-year-old man by the name of Frank Darden advised the panel that without the law he wouldn’t have been able to draw his gun during a confrontation last year with a disgruntled tenant he was trying to evict.

According to Darden, the tenant was about to attack him with a fillet knife but quickly had a change of heart after the property manager pulled his handgun.

“Without that law, I would have been stabbed to death,” said Darden, a firearms instructor. “I believe I wouldn’t be here without that law.”

Clifton Taylor, a retired air marshal, also spoke out in favor of SYG. 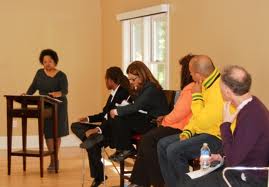 “Every day, hundreds of violent offenders go through the revolving doors of our state correctional facilities because they are too packed. They are at the McDonald’s we take our kids to, the Walmarts we shop at, they are out there in the public sphere with us all the time,” he said.

“Only thing standing between them and your life is the luck of the draw … Ain’t no time to retreat, retreat is gone. They are committing an act on you, so you have to stand your ground.”

The task force has five more public meetings planned across the state.  It will use research on SYG gathered from a variety of different sources, including the Florida International University College of Law and the Tampa Bay Times, as well as court testimony to make decisions on if and how the law should be changed.

The panel will present the findings and recommendations to Gov. Rick Scott next year.

“I’m confident that, once all of the facts come in, that this task force is going to do the right thing. I think it’s time now for us to get some fresh minds and fresh eyes to look at this law objectively,” Task force member Rev. R.B. Holmes of Tallahassee told the Huffington Post. “So far, I’m not seeing anyone digging in on their position. That’s encouraging, but I’m an optimist.”