Ray Carr, a resident of Charleston, Illinois, builds and sells homemade cannons. His most recent one is modeled after an 1862 Mountain Howitzer, it’s fully operational, and it can be yours for the low price of $4,750.

Despite the high price tag and the obviously limited market, Carr claims that a bunch of people are interested. He told The Daily Eastern News, “Most [prospective buyers] say, ‘I’d love to have it, but the wife wouldn’t let me.’” We’ve all been there before. 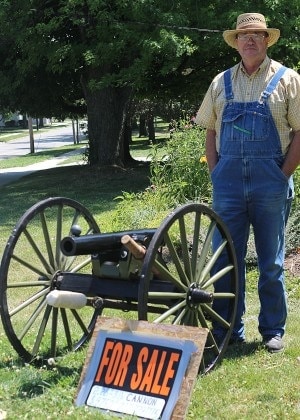 So, what motivates a man to build homemade Civil War replica cannons? The same thing that motivates all other gun lovers: he just likes ‘em. Carr has been interested in cannons ever since he was eight years old when he attended a Civil War reenactment. He recalled that they “were big and powerful and a lot of fun and make a lot of noise. Everybody jumped and ooh’d and ahh’d.”

People are still doing quite a bit of ooh’ing and ahh’ing now that Carr has perfected his craft. He likes to fire blanks with a bit of coffee creamer. “Calories is calories,” Carr explained. The creamer adds a bright flame to the already impressive bone-shaking boom.

When he’s not firing dairy products out of his cannon, Carr’s other favorite ammo is cement-filled Christmas ornaments. They shatter on impact and don’t have a chance of ricocheting back and hitting the user. Carr asked, “Wouldn’t it suck to get hit by that thing?” Yeah, probably.

The great thing about a cannon like this is that it’s generally legal to own one of these things. It gets around the Gun Control Act of 1968 because anything modeled off of something constructed before 1989 counts as an antique firearm. So, assuming you’ve got five grand to blow and you have the world’s most forgiving wife, this bad boy could be yours.

Can you imagine how much fun it would be taking this to the shooting range?