Another Self Defense Martyr: NJ Man Faces Jail Time After Defending His Home Against a Dozen Home Invaders (that happened to be squirrels)

Richard Baird, a 49-year-old New Jersey man, is facing criminal charges after fatally shooting nearly a dozen home invaders. The invaders were squirrels and his weapon was a BB gun, but those are trivial details. 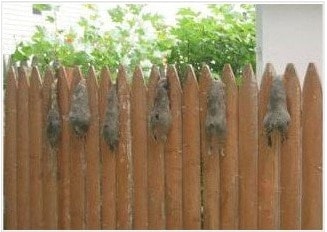 According to NJ news, Baird suffered a home invasion when squirrels began entering his house through an unpatched hole. He attempted to cover the hole, but the malicious varmints continued their assault.

Baird took matters into his own hands by slathering peanut butter on a tree and shot the squirrels with a BB gun when they came for a taste. Baird then hung the corpses from his fence in much the same fashion as did Vlad the Impaler, who impaled the heads of his enemies on pikes.

Baird later received a summons for a municipal court appearance on animal cruelty charges. If convicted, Baird could face a fine between $250 to $1,000, up to six months imprisonment, and up to 30 days of community service at an animal shelter.

Unfortunately, New Jersey does not have a Stand Your Ground law, so Baird will have to use a different argument for his defense in court. There is currently no word as to whether or not gun rights advocates across America have started a Baird defense fund. Additionally, there have not been any hoodie and peanut butter candlelight vigils. Guns.com will keep you posted.