In the past year or so we’ve seen a lot of new shotguns introduced which are inertia-operated from many manufacturers including Franchi, Stoeger and Charles Daly. These mark the end of Benelli’s monopoly on inertia-operated shotguns, their patent lapsing and the designs entering the public domain.

But Benelli was not in fact the originator of the inertia-operated shotgun. The first possible inventor of such a firearm may very well be Carl Axel Theodor Sjögren of Sweden. Designed 1900 and put into manufacturing by 1909 at the latest by the Dutch firm Haandvaabenverksäderna, the Sjögren Shotgun and Military Rifle both were early inertia-operated guns.

The reason these early semi-automatic guns never took off we can’t say, although they were submitted to the British military for evaluation, they did not pass muster. It could have been as simple as something like cost.

The design is definitely inspired. Unlike modern inertia-operated guns the barrel is fixed and it uses a striker-pin locking block. Once the trigger is pulled and the striker released, the breech-bolt cover moves forward, which re-cocks the striker, which then unlocks the breech bolt. By this time the internal pressures will have dropped to safe levels and the breech assembly will cycle like you’d expect, ejecting the spent cartridge and chambering a fresh one.

You can read a translation of the operation here (.pdf).

Or, in other words, “As the gun fires, we find that the inertia block, true to its name tries to “stay put” when the gun recoils. Initial recoil of the gun exceeds initial recoil of the inertia block by about 1/16th inch, thus compressing the accumulator spring between the recoiling gun and the nearly non-recoiling block. In effect, the block moves forward in relation to the gun during initial recoil. The accumulator spring then asserts itself and throws back the inertia block. The sear carries the firing pin back so that it no longer jams the locking block. As the inertia block continues to the rear, the fingers of the assembly key strike the levers of the locking block rotating it to the unlocked position and carrying the whole assembly to the rear, extracting and ejecting the fired shell.”

We’re still not entirely sure we understand how these guns work. The Sjögren Military Rifle had a 4+1 capacity, which wasn’t bad for the time, and the shotgun’s capacity isn’t noted.

We’ve come across this interesting gun courtesy Forgotten Weapons, who managed to get a hold of some photos of one that looks good enough to shoot to this day. 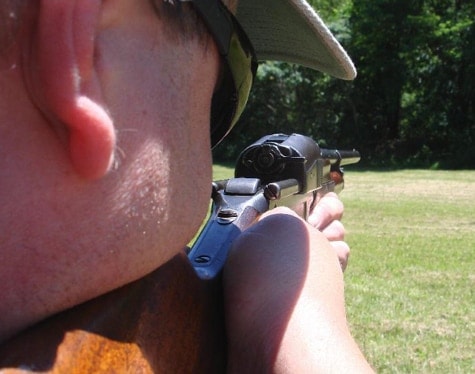 “The Sjögren rifle and shotgun designs definitely fit the description of Forgotten Weapons. Developed in Sweden, the Sjögren system used a fixed barrel and recoil-operated action in both a 12 gauge shotgun and .30 caliber military-style rifle. It was claimed to have very light recoil, as a result of the energy absorbed by the action cycling, though this recoil reduction was not any more significant than today’s autoloading firearms.”

If you’re at all interested in unique weapons—they’re not often forgotten without reason—you definitely need to read up on the Sjögren Shotgun and Military Rifle.