George Washington's Personal Pocket Constitution to Go Up for Auction

George Washington’s personal copy of the Constitution will go up on auction June 22, WLSAM reports.

This pocket Constitution was signed by Washington and contains his personal notations. Evidently, politicians back in that time period liked to carry around pocket-sized copies of the Constitution, study it, and make notes. We think 21st century politicians could stand to take a page of Washington’s book.

This copy of the Constitution and the Bill of Rights is from 1789, which just so happens to be Washington’s first year as president. 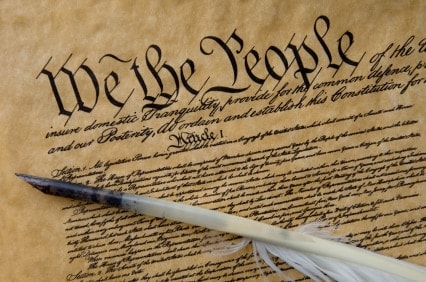 We can only imagine the kinds of things Washington thought about the Constitution and the Bill of Rights in his first year of office. Did he hate some parts of it and love other parts? Did he circle the Second Amendment and write next to it “Second Amendment is #1! Guns 4 Life!” Well, probably not, but it will give the lucky buyer incredible insight into the mind of our first president.

The auction group Christie’s will be holding the auction for this historic document on June 22. It’s expected to fetch somewhere between $2 and $3 million. A similar document, Lincoln’s 1864 victory speech, went for over $3 million.