A few months ago, the Cato Institute sponsored a policy forum or expert discussion on self-defense laws, including the controversial ‘Stand Your Ground’ law.  Among those speaking at the event was Massad Ayoob, the internationally renowned firearms and self-defense instructor.

Ayoob, by most accounts, is a guru in the gun community.  He’s been an editor at GUNS magazine and AMERICAN HANDGUNNER since the 1970s, and has published thousands of articles in gun publications, martial arts publications and law enforcement journals. 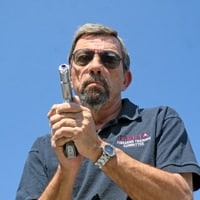 But as far as his writing goes, Ayoob is probably best known for his seminal work, ‘In the Gravest Extreme,’ which is widely considered to be the authoritative text on the topic of the legal use of lethal force.

In addition to being a prolific author, he served 19 years as chair of the Firearms Committee of the American Society of Law Enforcement Trainers, and several years as a member of the Advisory Board of the International Law Enforcement Educators and Trainers Association.

He is a regional handgun shooting champion, a judicially recognized expert witness for the courts in weapons and shooting cases (since 1979), and a Captain in the Grantham, New Hampshire police department, where he has been a fully sworn and empowered, part time police officer for 36 years.

In any event, you get the picture.  The guy is a sage when it comes to all things self defense and firearm related.

So, here the speech he gave as part of the Cato Institute’s panel discussion (it’s worth watching the entire clip):

Ayoob does a great job defending ‘Stand Your Ground.’  In his measured tone, he dispels rumors about the law (e.g. one can’t just shoot someone because he/she feels like it, he/she needs to establish ‘reasonable’ fear of imminent death or great bodily harm) while making several cogent points concerning the need to support it (e.g. the presumption of self-defense streamlines the judicial process and saves taxpayers money).

But, as I’ve said in the past, in theory SYG is a great law.  In practice, it’s being abused.

Personally, I think the law needs to be improved.  I’m specifically referring to Florida’s version of the law, which is the most widely known and discussed.

I’ve been giving this some thought, after reading your comments and doing some research, here are three ways I think Florida’s SYG can be improved:

1.    The law is inapplicable if the shooter possesses a firearm illegally.

2.    If the suspect has a history of violence or a felony conviction, he/she loses the preponderance clause.  In other words, a judge can’t dismiss the case; it must go before a jury.

3.    If the shooter left the scene to arm himself/herself, and then returned to confront the victim, then SYG does not apply.

I think a SYG law with these explicated provisions would help to reduce the number of criminals who invoke the statute, thus reducing abuse.

These are just preliminary suggestions.  I’m interested to see what the Florida task force reviewing the law discovers.

Are there any potential improvements I am missing?