A clever maneuver by the Calguns Foundation to prevent microstamping legislation from being enacted in the Golden State was highlighted in a recent New York Times article, “New Method to Track Gun Use Stalled by Foes.”

Gene Hoffman, the chairman of the foundation, explained to the Times how he was able to stave off a microstamping law by exploiting the patent process to keep the bullet engraving technology from entering the public domain:

In California, legislation signed by Gov. Arnold Schwarzenegger in 2007 has been held up while the attorney general’s office makes sure the technology is unencumbered by patents, as the microstamping law requires. A gun rights group, the Calguns Foundation, went so far as to pay a $555 fee to extend a lapsing patent held by the developer to further delay the law from taking effect. 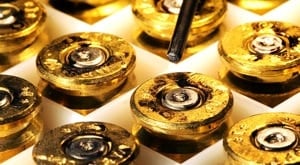 “It was a lot cheaper to keep the patent in force than to litigate over the issues,” Gene Hoffman, told the Times, adding that he believed the law amounted to a gun ban in California.

Although it may only be a temporary solution, it’s a brilliant move.  Especially when one considers how pricey litigating and lobbying can get.

During the first six months of 2010, the National Shooting Sports Foundation spent $70,200 to block microstamping legislation in New York.  The National Rifle Association followed suit, dropping a cool $80,000 to kill the bill, which fortunately died in the Senate.

The need to drop that kind of cash comes because New York City Mayor Michael Bloomberg, one of the chief proponents of microstamping, and his pro-gun control comrades across the country are resolved to see it fully implemented.

But the reality is that microstamping is a seriously flawed technology that is easily circumvented.  This is not conjecture or biased pro-gun rhetoric; several independent, peer-reviewed studies have confirmed this fact.

Therefore, putting aside agendas and politics, etc., and looking at the issue objectively, the argument to be made against bullet engraving is a simple one, as Lawrence Keane, senior vice president and general counsel for the NSSF noted in the Times’ article.

“There’s no point in rolling out a technology that does not work,” he said.

Unfortunately, convincing people of this obvious fact remains a challenge.  Hence the ever growing need to spend money on patents, lobbyists and lawyers.