The Slide Fire isn’t the only bump-fire stock in town. FosTech Outdoors is developing their own bump-fire stock for the AR-15 platform. Using the same principles but a completely different construction, we expect it to be a pretty popular (if more expensive) alternative to the Slide Fire. It is called the DefendAR-15.

These stocks make it even easier to bump-fire a gun by creating a stock that allows the firearm to move independently. They incorporate a shelf for your trigger finger and a pistol grip that also moves separately from the gun. All you have to do to simulate fully-automatic fire is to grip the rifle as you would normally and push the handguard forward.

We’ve shot the Slide Fire and have to say that they work as advertised and really are easy to use and operate, and given the push-pull grip you have to adopt in order to make them function, are actually pretty easy to group with. With practice, it would be absolutely possible to master two-or three-shot bursts, too. 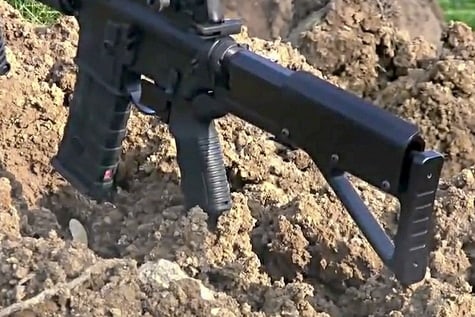 The DefendAR-15 differs from the Slide Fire by being aluminum in construction. The Slide Fire is polymer. It’s a very solid design with a hefty square rail for the stock to reciprocate on, and it features a separate cheek riser to keep your face away from the rail as the rifle reciprocates.

They’re accepting pre-orders for the DefendAR-15 stock, with deliveries expected to be for the second week of July. The DefendAR is not an inexpensive piece of kit with a pricetag of $500. But $500 is still a whole lot less than a registered machine gun, especially an AR or M16, or even just a Lightning Link or Drop-In-Auto-Sear (DIAS).

The DefendAR can be locked back to return your rifle to its original semi-auto operation, too. 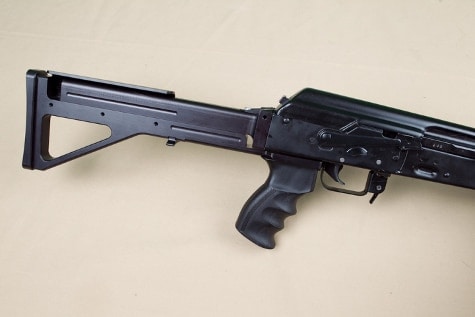 FosTech Outdoors has developed several different bump-fire stocks, including the Bumpski for AK-pattern rifles with options for left- and right-handed shooters and the Springless AA2 for Ruger 10/22s (it was originally made such that a spring, and not the shooter, moved the receiver, and subsequently the trigger, forward, and the ATF said no thank you, please knock that off).

What’s your opinion of bump-fire stocks? A fool and his money are soon parted, or a great way to make noise and have fun?