The Los Angeles Police Department will be displaying two tons of art that was created out of guns, Southern California Public Radio reports.

You ever wonder what the police does with all of those guns they get from the buyback program? Evidently, they give them to artists like Victor Hugo Zayas (or this lady) so that they can turn them into works of art. Move over, Mona Lisa, because “Mushy Guns Shaped Like a Ball of Yarn” is here to stay! 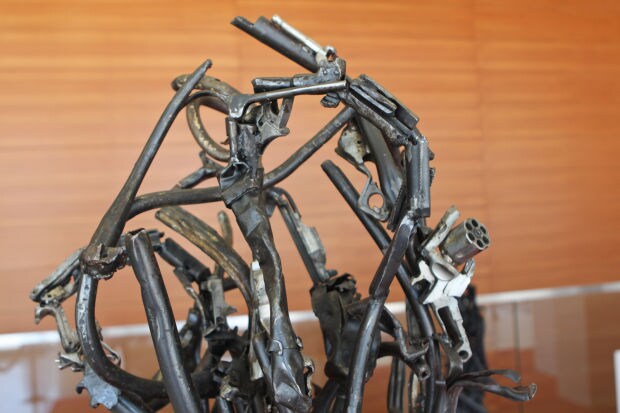 Zayas has created 17 gun art sculptures, which he viewed as a positive experience. “The idea is that this group of sculptures should become a kind of peace symbol, because transforming something so negative into something so positive, well, people connect with that immediately.”

Zayas dedicated one of his pieces, a sculpture created out of 200 dismantled weapons that weighs 300 pounds, to a friend of his, Efrain Castro, who was murdered (by blunt force trauma to the head, not a gun shot). There is currently no word as to whether or not Zayas will also create sculptures of melted-down baseball bats and crowbars.

The LAPD will be displaying these sculptures in the lobby of the LAPD’s downtown administration building for at least a month. Zayas isn’t sure where the gun sculptures will end up after that; he’s gotten calls from people all over the world who are interested in showing off his art.

What impact does Zayas’ art have on you? If it evokes an emotion, feel free to share it in the comments below!