Crosman is introducing a new series of “Airsoft Defense” toys (warning: these are not toys) with a zombie theme, and it features all the crazy bright green plastic and unsupportable “tactical” flair that has come to be in many actual, shooting lead firearms. And yet, they still represent weapons that would conceivably come in handy in a zombie scenario.

The two primary Airsoft Defense guns are a suppressed submachine gun and a magazine-fed shotgun. But it also goes to include a handful of pistols that come in standard, suppressed, and clear variants.

The submachine gun is the Z71, the Zombie Eraser, with a full-auto function will stay in the game for quite some time with its 500-round magazine. It is gravity-fed but uses a hop-up feeder for improved range. Powered by a rechargable nickel–cadmium battery the Zombie Eraser is a flexible BB gun with its detachable stock for close-quarters engagements and Weaver rail for optics. It weighs just over two pounds and fires 6mm BBs at about 200 feet per second. The MSRP on the Zombie Eraser is $58.

The ZT32 Zombie Terminator is also impressive with its 19-shot capacity as well as a good muzzle velocity of 350 feet per second. It is a pump-action spring-powered airsoft shotgun that also has a Weaver rail for improved sights. The Zombie Terminator runs $55. 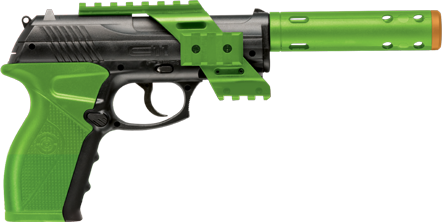 The Z11 Zombie Eliminator is a fine hold-out pistol that would come in handy against the zombie hoard, not to mention survivors who would kneecap you to gain an advantage. It is a pistol that comes in three models, the standard model, which is available in black or clear plastic, and the TACZ11, with a silencer and quad-rail adapter. All Z11s are CO2-powered and have a 16-round capacity. They fire their BBs at speeds up to 400 feet per second and weigh about 1½ pounds. The Z11 pistols are $43 for the basic models and $45 for the tactical version.

Along with these Airsoft Defense guns are green “Serum” and blue “Antidote” marked BBs for team play, zombie targets to practice with, and a “Zombie Fun Kit” which includes four color-marked Z11 pistols and matching BBs, four goggles and a mess of Zombie targets.

So if you can’t get enough zombie gear, or like it but don’t want any of that nonsense on your actual firearms, check out Crosman’s Airsoft Defense line right here.