NRA Squares Off with Florida Sheriffs over Gun Survey (VIDEO)

Its an election year and the National Rifle Association wants to know where candidates stand on the issue nearest and dearest to its heart: guns.

While this is not surprising, the NRA has sent surveys and graded candidates for years on their position with respect to firearms, what caught some Sunshine State residents off guard is which candidates received questionnaires this year.

That is, for the first time ever the NRA sent surveys to Florida sheriffs, querying them on hot topics such as ‘open carry’ and the state’s controversial ‘Stand Your Ground’ law.

One of the 14 questions reads:

Do you agree that no victim of crime should be required to surrender his life, health…or property to a criminal, nor should a victim be required to retreat in the face of an attack from any place he or she has a right to be?

a.__yes, i believe… “stand your ground” is appropriate and victims have right to fight back without a duty to retreat.

b.___no, i oppose …”stand your ground” and believe victims should surrender to criminals or retreat to avoid fighting back.”

Although his organization has yet to take an official position on the survey, Executive Director of the Florida Sheriffs Association Steve Casey is crying foul.

“This is definitely a political tool,” he told The Palm Beach Post. “This is not your standard survey. This is a tool they plan to use to sway the election towards one candidate over another based on the things they were asking. They’re telling you what their agenda is on the survey and what your answers should be. It potentially could affect the primary and the general election.” 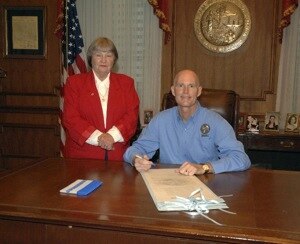 The survey erroneously creates two kinds of sheriffs, Casey added: “pro-gun” sheriffs and “anti-gun.” But he says they are neither. “They’re pro-public safety,” he said.

In other words, the questions create a kind of false dilemma, allowing zero room for nuanced answers or positions.

But the NRA’s Florida lobbyist, Marion Hammer, sees no problem with the way the questions are worded.

“Candidate questionnaires are traditionally how most organizations find out where candidates stand on issues that are important to their members,” she told the Post.

“This is an educational process,” she continued.  “Voters have a right and a responsibility to know who they are voting for. I’m not apologetic if that offends the Florida Sheriffs Association and anti-gun sheriffs.”

On its website, the NRA-ILA went one step further and explained that the questions were designed to be challenging.

“Just because some sheriffs are uncomfortable answering some of the questions and don’t like the options for answers, is exactly why it is framed the way it is,” the website states.

It concludes with this very cogent point, “Make no mistake, sheriffs are politicians.  They ask for money and votes.   Voters have a right to know where they stand on issues that are important to them before they give either.”

Roughly half of Florida’s 66 elected sheriffs are running for reelection this fall.  An endorsement from the NRA could make all the difference in these cash-strapped county elections, especially because Florida is a pro-gun state with thousands of active and enthusiastic NRA members.

Ms. Hammer said once the surveys are collected, they will be reviewed, each sheriff will be given a grade, and then “we will let our people know.”

— In 2005, the Florida Legislature codified common law into statutory law and passed “Castle Doctrine/Stand Your Ground” legislation to protect the rights of victims. Now, anti-gun agitators, who oppose self-defense, are working to destroy the freedom and rights of innocent victims in favor of protecting criminals.

Do you agree that no victim of crime should be required to surrender his life, health, safety, personal dignity, autonomy, or property to a criminal, nor should a victim be required to retreat in the face of attack from any place he or she has a right to be?

a. ___ Yes, I believe the “Castle Doctrine/Stand Your Ground” is appropriate and victims have a right to fight back without a duty to retreat.

b. ___ No, I oppose the “Castle Doctrine/Stand Your Ground” and believe victims should surrender to criminals or retreat to avoid fighting back.

— It is a growing practice of some sheriffs and their deputies to travel to Tallahassee during legislative session to lobby against Second Amendment issues and the rights of law-abiding gun owners. Some even make those trips using official vehicles, while officially on duty and lobby in their official uniforms.

A. Do you believe it is appropriate for a sheriff to lobby or use deputies and/or their deputies to lobby against the Second Amendment rights of the law-abiding citizens they are sworn to serve?

B. Do you believe it is appropriate for a sheriff or any of his deputies or employees to lobby on issues against the constitutional rights of law-abiding firearms owners , in the name of the Sheriff, Sheriffs department or any Organization or Association in any official law enforcement capacity.

a. ___ No, I would not allow it. Our duty is to respect and serve our community and uphold the law and the Constitution.

b. ___Yes, I would allow it if it makes things more convenient for law enforcement.

— During the 2011 legislative session, legislation was introduced to protect concealed weapons/firearms (CW) license holders against harassment, persecution and prosecution, if — in the course of carrying concealed — a firearm was accidentally, inadvertently or unintentionally exposed to public view or if the imprint of a firearm was recognized by a law enforcement officer.

Do you support allowing law-abiding persons licensed by the state to carry a concealed firearm to also carry openly?

a. ___ Yes, I support open carry by CW license holders as a means to stop harassment by those anti-gun law enforcement officers.