Russia Will Adopt the Strizh Pistol to Replace the Makarov

After over sixty years of service in Russia, the Russian armed forces will be switching from the storied 9x18mm Makarov PM to a modern, full-size 9mm Parabellum pistol. From Ria Novosti: “We are certifying a new pistol, the Strizh, which will replace the Makarov pistol in the next few months,” said Deputy Prime Minister Dmitry Rogozin, who oversees the defense industry, in an interview with Rossiya 24 television.

What’s interesting is the pistol they’ve selected, the Arsenal Strizh. 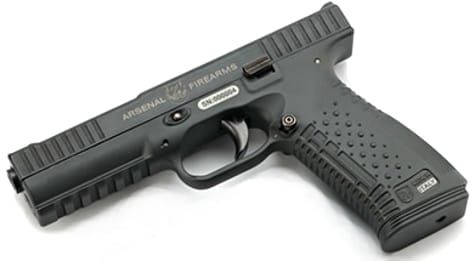 The Strizh—which will be marketed in the US as the Strike One—is a brand-new design by the Arsenal Firearm Group. The Strizh was announced last March and isn’t yet in full production, let alone proven in the field. The design looks very promising just the same.

The Strizh pistol uses a falling block barrel lock like in the Walther P38 and Beretta 92, as opposed to a Browning-action tilting barrel. This allows the barrel to travel straight back during recoil which can contribute to accuracy but also means that you can use simple silencers without Nielsen devices, which are less expensive to manufacture. It also contributes to the gun’s very low bore axis, which goes a long way to reducing perceived recoil and muzzle flip. 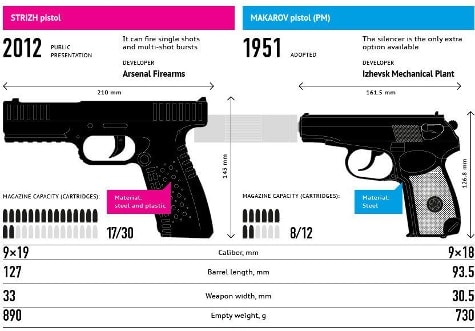 There will be at least four models of Strizh, a 5-inch full-size and a 4.3-inch service-size variant, and both are available with either a polymer or aluminum alloy frame. Built into the frames is a monolithic steel subframe, similar to the subframe of the Caracal and SIG P250 pistols. These long rails run almost the length of the gun’s frame, another element that contributes to accuracy.

The Strizh Russia has chosen will be in 9mm and have a capacity of 17+1 with standard-capacity magazines and will have the option of 30-round magazines as well. The 30-rounders are probably for the long-range conversion kit, which replaces the standard barrel with a 12-inch barrel and adds a quad rail to the front half of the gun. It does not add a rifle stock, but it includes a folding bipod. Because the barrel cycles straight back, the quad rail attaches to it at the muzzle of the kit. 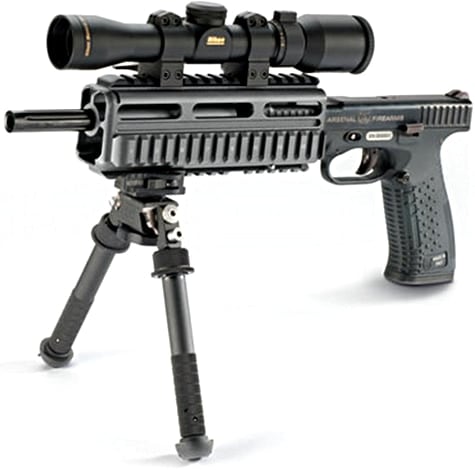 This is an interesting decision because not only is the pistol brand-new, so is the company. Arsenal was founded in 2011, a joint Russian/Italian firm located in Russia. It was founded by two gun engineers, gun writer and gun designer Nicola Bandini and gun collector and gun miniature master Dimitry Streshinskiy. 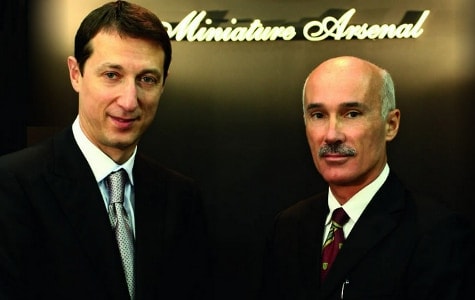 In one way, this speaks volumes about the Strizh pistol, that it’s getting adopted for service right out of the gate, or it could also mean that the Russian armed forces have collectively lost their heads in selecting a completely unproven handgun. Also, we can’t rule out national pride. The Strizh is a very modern handgun and if runs as well as Arsenal hopes it will, we have no doubts that the Strizh, or Strike One, will become very popular all around the world.

They plan to make the changeover starting in “Next few months,” according to the official Russian Facebook page.

This could also be good news if they decide to export some of the Makarovs they are planning to retire. We’re pretty sure some people would love to pick up a gun with six decades of history behind it.

Arsenal is most famous (or infamous) for their double-barreled 1911s.