Bushnell, one of the largest producers of rifle scopes, is announcing a new 1-6.5× short-to-midrange riflescope (SMRS) for .223 Remington/5.56 NATO rifles with an illuminated 600-range reticle. Scopes with magnification ranges like this are fantastic all-purpose scopes for hunting, competition shooting and plinking at all ranges. 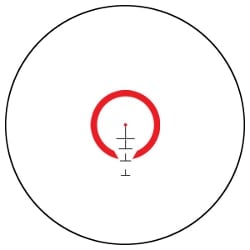 Their flexibility extends to law enforcement and the military as well, not to mention being both elite and tactical, since these scopes are basically made for the AR platform. They will be available in four models, with two reticle illuminated options on either the first or second focal plane. The BTR-1 is a very clean reticle with unlabled rangefinding marks descending from the center of the illuminated ring. The BTR-2 has rangefinding lines for both windage and elevation and is numbered out to 1,000 yards.

The option to have the reticle on the first or second focal plane is a matter of preference. The first plane reticles will magnify with the zoom, although some people notice some shifting of the reticle’s focus (there is a parallax adjustment dial to correct for this). The second plane reticle will always be clear, and its fixed rangefinder is designed to be used at one power and does not zoom, but will always be in focus. 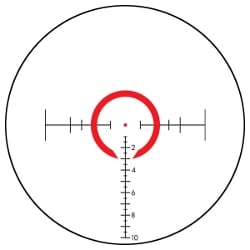 This scope’s compact, lightweight package adds to it’s elite tacticalness, measuring in at 10.6 inches long and weighing in at 18.5 ounces. Definitely nice for anyone who has to worry about carry load. Other specifications are that the reticle has 11 brightness settings, 3.75 inches of eye relief, and click-adjusting turrets with 0.1 MOA clicks.

The SMRS uses a 30mm aluminum tube and multicoated optics, like you would expect from modern optics of this class. The scopes are “100 percent” shockproof and waterproof, and backed with a lifetime warranty. The waterproofing is Bushnell’s HD process which is a permanent coating over the entire scope, so don’t worry about taking it into the rain or the pool, if you’re a firm believe of pool-carry. The scope is argon-purged to prevent fogging.

Another nice thing about this scope is that it’s guaranteed by Bushnell’s new first-year money-back guarantee. They’ll give you a year to see if this scope suits you. Bushnell has not listed the MSRP but several dealers are already listing it at between $1,300 to $1,400, which puts pressure on Leupold, whose similar Mark 6 1-6×20mm M6C1 scope is priced almost twice as high.

These new compact, wide-ranging scopes that start at zero magnification are incredibly flexible and well-suited to almost every shooting scenario you may come across with an AR-15, and while they’re not inexpensive, they’re also pushing what scopes can do in these packages. We’re happy to see a little competition in this very select optic arena.