Starting in 2009 (with prototyping in 2008), Rheinmetall was given a contract to develop an early version of the Gladius system for the military. This system was designed to compliment Germany’s Future Soldier system (IdZ) which was implemented to rapidly modernize and improve the soldiers’ loadout in 2005, after the first three years of deployments to Afghanistan.

Finally out of development, Gladius improves on the IdZ by adding current-generation networking and command and control technology. Right now, a total of 900 soldiers will be selected to try out the new equipment. According to Rheinmetall, it is the most advanced system of its kind anywhere. Gladius will be fielded in Afghanistan starting in 2013. 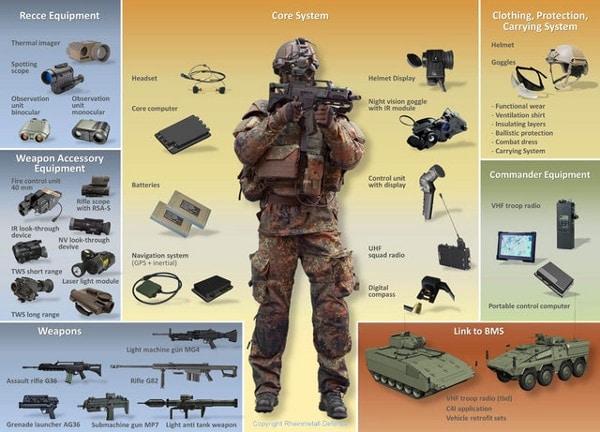 The German military is looking forward to completely overhauling their military with this advanced warfighting technology. Each individual soldier will receive relevant data pertaining to their combat situation, including the location of friendlies, mission updates and sitrep. The Gladius system combines GPS locators on every soldier and compliments it with an inertia- and compass-based navigation system to pinpoint the location of all soldiers relative to each other. The unit commander can tap this data personally with his own computer system, and relay information straight to the grunts via helmet-mounted displays.

The soldiers, grouped in 10-man infantry sections as well as their vehicle, the Boxer, will be networked to each other as well. They will be able to communicate and relay information directly to each other in a single loop. This will dramatically improve unit cohesiveness. And it also lets you call someone names from far away, we know how important that is in these situations. 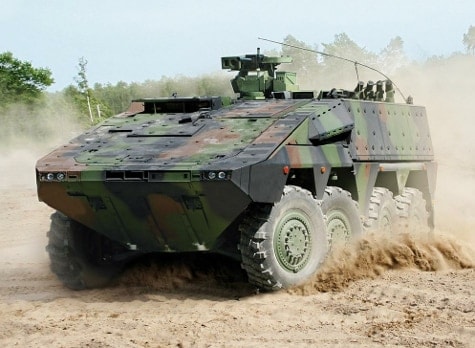 Impressively, the Gladius system was also designed around weight reduction. Often times, when it comes to redesigning soldier loadouts, more is added than taken away. This is largely based on electronics miniaturization, but is also due to the modular nature of all the equipment, meaning not every soldier has to carry the same kit.

Gladius incorporates new BDUs, new body armor and a new harness system for gear, Gladius or otherwise. In addition to improving weight distribution, the new fatigues take into consideration extreme weather and will hopefully keep the German soldiers cooler in the field. They’re also flame-retardant and designed to ward off chemical and biological agents.

So in addition to bringing the soldiers closer together electronically the Gladius system is designed to protect them better physically, as well.

The Gladius system really puts the Bundeswehr at the forefront of infantry loadouts, and is definitely enviable kit. If this works out more than just on paper, we hope to see something similar grace our own soldiers, as wells as our allies’ troops.