Pew-Pew! Navy On the Verge of Adding Lasers to Ships

Wired reports that the US Navy is on the cusp of outfitting its ships with honest-to-god pew-pewing laser guns, but a congressional study warns that the Navy may have jumped the laser gun. For all of the research that been poured into making Star Wars-esque blasters, the Navy hasn’t spent nearly enough time outfitting their ships to handle laser weaponry. 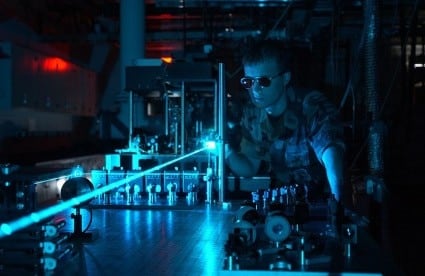 Lasers operate a bit differently from your standard gun. Rather than relying on explosives to move objects at extremely high speed, they use electricity to create concentrated beams of energy. The problem is that most naval ships don’t have a power grid that can sufficiently handle that kind of drain. Or, as Scotty would say, “She can’t hold out much longer, Captain!” It’s kind of like doing research to build a gun without spending any time to manufacture an efficient bullet.

A report issued by the Congressional Research Service warns that the Navy will need to give a major boost to ship generators if they expect to get the laser guns they’ve always dreamed of.

They’ve got less than 10 years to get their ships prepared for laser gun warfare. Yes, you heard that right: we’re less than a decade away from combat-worthy death lasers. The report stated, “Over the next few years, [lasers] capable of countering certain surface and air targets at ranges of about a mile could be made ready for installation on Navy surface ships.”

That’s great news that the military is on the verge of laser weapons and all, but we have one question: how much longer do we have to wait before civilians can carry around their own laser guns? Are lightsabers around the corner, too?