Israeli Weapon Industries (IWI) has updated two of their most popular rifle platforms, the proven and dependable Galil and the new and increasingly popular X95/MTAR-21/Tavor-2 bullpup. They’re adding top rails for optics to these rifles.

According to Uri Amit, IWI’s CEO, “We are pleased to introduce a variety of new configurations that expand our portfolio of solutions in the area of assault rifles. We continuously invest in the development of new products, working together with our customers and developing the best possible weapons to meet their needs.” 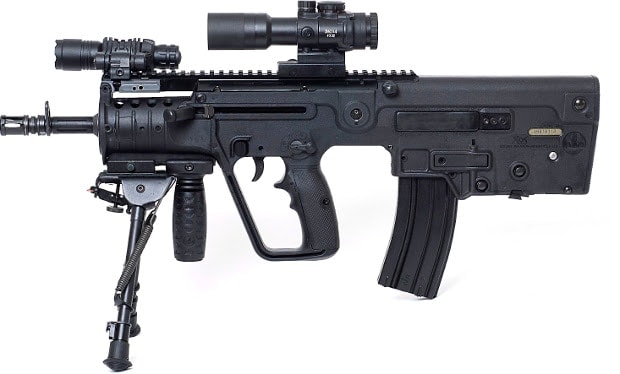 While the existing X95s do have rails for optics, they’re short and directly over the action of the rifle. They have a smaller forward optional quad rail handguard, but its top rail does not run at the same height above the bore as the primary optic rail. The new X95 FLATTOP takes a page out of the original Tavor’s book an uses a single long flattop rail for optics, accessories and iron sights.

The X95 FLATTOP retains the other features of the X95s; it is primarily chambered in 5.56 NATO and uses standard AR/M4/STANAG magazines and has an optional 9mm conversion kit, and has ambidextrous controls and can be configured to eject on the left side for left-handed shooters.

The updated Galil is also interesting, as it features not just a rail but has been modified to also accept standard NATO magazines. This new Galil is called the ACE N, for NATO, and is chambered in 5.56x45mm.

The ACE N is a hybrid of several very successful rifle patterns, notably using the long-stroke gas piston system of the AK-47. However, it uses a receiver milled to much higher tolerances and is a generally more accurate rifle. Part of that is due to the fire control group, which is descended from the M1 Garand.

The ACE N ditches the usual Galil furniture for a quad-rail Picatinny handguard, which run in-line with the dust cover rail and uses an M4-style telescopic buttstock with an optional side-folding tube. It also has updated low-profile iron sights.

Both of these new models are intended for military and foreign security markets. However, we do hope that IWI begins manufacturing and assembly of these rifles in the US. Currently, IWI has plans to set up facilities here and start production of Tavor rifles for American consumption later this year.