The AKARS follows in the footsteps of the Polish Beryl rail system and mounts to the barrel trunnion in place of the rear sight. Instead of attaching to the rear trunnion, the front part of the rail uses a very tight 3-prong mounting system that locks it into place preventing any side-to-side play. It is an incredibly rigid fit that doesn’t use the dust cover for stability. 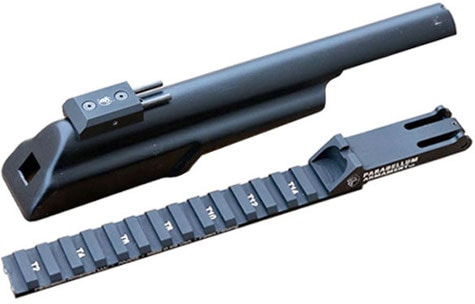 It is free to move up and down to facilitate field-stripping. The AKARS comes with a custom dust cover with a rail catch which holds the AKARS in place vertically when not disassembled. The dust cover catch is designed to be adjusted for a perfect fit no matter what the tolerances of your AK happen to be.

The AKARS also has a built-in rear sight dovetail machined into the the mounting block end, so you aren’t giving up on iron sights in favor of a Picatinny rail. This is a great option for anyone whose AK does not have a side rail mount. 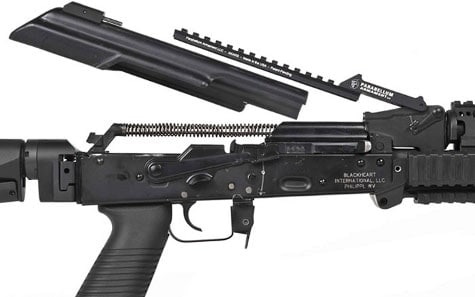 What really sets the AKARS apart from the majority of AK top-cover rail systems is that it’s not truly a top-cover rail. It’s a free-floating design that isolates itself from the vibrations and stresses applied to the cover, which both helps maintain zero and prevent excessive wear to any optics. It is an all-steel design, too, not aluminum like the majority of other AK rail systems.

We had the opportunity to damage an AKARS at SHOT Show a few months ago. Specifically, the AKARS on the range at Media Day, with an optic installed. They gave us full range to try to break or even slightly upset the AKARS, in front of the entire shooting world. We couldn’t do it. Not for lack of trying, though, it’s just a very tough and, in the spirit of the AK, overbuilt rail system. It’s also simple and easy enough to install without any special tools.

And as word of this genuinely unique and well-made accessory get around, Parabellum Armament has had a backorder for some time, and so has Aim Surplus. But good news as Blackheart International has acquired a crate and are offering them for the standard price of $130. The AKARS is, unfortunately, not compatible with the Yugo/Zastava AK variants (M70, M72, M92), AKS-74Us and variants with hinged receiver covers or Romanian PSLs.

If you’re looking for a quick project that will modernize your old AK or you want to build a 21st century Saiga for your next round of home gunsmithing, check out the AKARS. There are many rail options for AKs of late, but few that stand out quite as much as this one.