Guns.com recently published an editorial by long time writer David LaPell about a string of customer complaints regarding Bass Pro Shop’s concealed carry policy.  The article concerned carriers being asked to check their arms before entering the store and it created quite a stir online with folks messaging us coming from across the country both verifying and refuting Mr. LaPell’s insinuations that Bass Pro Shops policy, whatever it was, appeared to be arbitrarily enforced by employees depending on the store location and also not readily available to him in print.

Well, Bass Pro Shops responded immediately and, as you will read, acted expeditiously, contacting Guns.com the day the article ran to acknowledge that the company representative who responded to David’s query gave him false and misleading information and to also maintain that they have always been and always will be a pro-concealed carry company.  We were also informed by Bass Pro Shops that they were unaware of the many complaints concealed carrying customers had about checking weapons with greeters. They will be looking into this and in an effort to address customer concerns, Bass Pro Shops will now be disseminating their concealed carry policy online, for all gun owners to reference. 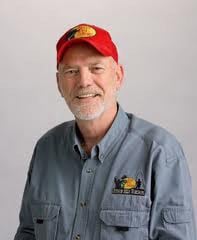 Through email and by phone, Bass Pro Shops Manager of Communications, Larry Whitely, confirmed to Guns.com that the employee identified as Lynette who responded to Mr. Lapell’s questions did work for Bass Pro Shops and that she did not accurately communicate company policy regarding concealed carry, which allows customers with a legal concealed carry permit to carry their weapon in any Bass Pro Shops store as long as the state permits the practice, as seen in this internal training document which has been in place at least since 2008.

“Bass Pro Shops has always been committed to preserving the Second Amendment and strongly supports concealed carry rights with our policy being that any customer may legally carry in any of our stores if the state allows it. Associates are also required to watch a video that basically says [this] and sign a form that they understand this. This employee did not understand or communicate the right information and we are looking into addressing this situation fully.”

The first step in this process is to publish the company’s concealed carry policy.  Indeed the last paragraph of the Policy section sounds particularly cut and dry to us: 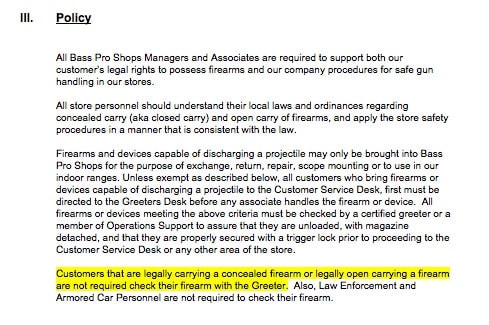 For their own part, Bass Pro Shops hosts concealed carry classes and has been very active in the support of gun rights and culture, most recently building a new 7,000 foot headquarters in Missouri that will act as an official satellite branch of the NRA’s National Firearms Museum. We were told that Bass Pro Shops has and will be addressing the matter privately with their employee and Mr. LaPell.

In his article, David attempted to use the same avenues any customer would be asked to use to question the company’s concealed carry policy, in part to replicate the experience the average gun owner would have to go through to get this information and in part to better complement the editorial nature of the piece.  A couple of readers questioned David’s investigative methods, with some blogs even going so far as to call the article unethical, despite the fact that he did utilize source information from Bass Pro Shops and the piece was run as an editorial.

We maintain David’s journalistic methods adhered to sound editorial practices and, in light of the feedback from Bass Pro Shops, independent bloggers who took the time to properly investigate the story on their own and the gun community, we feel now as we did then that this was a well informed story and perspective worth sharing with our readers and other concerned gun owners.

As an independent publication, it’s not Guns.com’s job to give our opinion but rather to host the opinions of our writers and readers. Though practically impossible, we make an honest effort to remain as objective as we can, stay out of the way of our writers and allow them to tell their story, no matter what that story is, as long as we think it will, a) interest and benefit gun owners and b) conform to ethical journalistic methods and practices.

In kind we try not to editorialize our own editorial content, but if you were to force Guns.com to weigh in on the article, well, the fact is these types of things happen with an employer of Bass Pro Shops size and though that is not an excuse, nobody is immune to mistakes.  The important thing is that mistakes are amended and we have been thoroughly impressed at how quickly and in our opinion appropriately Bass Pro Shops responded to the claims in David’s article.  We can also assure you that the company’s representative, Mr. Whitely took the article seriously, imparted a very pro-concealed carry, pro-2nd amendment attitude and seemed genuinely concerned about David’s and any other carriers’ negative experiences at his stores.

The fact that the article alerted them to the issue and, in response, they are becoming more transparent by circulating their concealed carry policy says to us that at the end of the day, all parties involved—Bass Pro Shops, David LaPell, Guns.com and gun owners—are likely better off for it.