Street photos have captured one member of the German equivalent of a SWAT team raiding a bar with a revolver.

Alright! That’s what we like to see. Though it’s rarely seen today, it’s not unheard of to hear about police carrying a revolver, but SWAT? What’s next? Lever-action rifles in the Army? 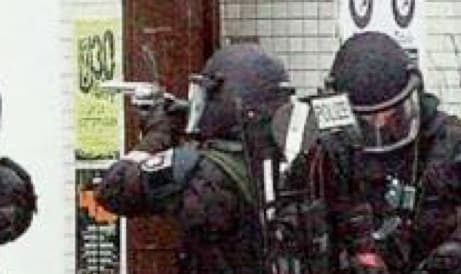 The photo was taken in Hamburg, Germany (we hear they make great beef sandwiches). The Mobiles Einsatzkommando (or “Mobile Tactical Squad” for us Americans) showed up in force at a bar when one patron killed another. What’s so interesting about this photo, The Firearm Blog points out, is that it’s not just any German officer carrying a revolver – it’s one the leading team members. We could understand that the guy who got the short end of the budget stick would bring up the rear with a revolver and outdated kevlar, but do you want a guy with a revolver in the front?

Well, the philosophy behind a revolver up front, as Guns.com has heard, is you give the guy up front with the shield a revolver. That way he can hold the gun out and shoot without risk of his weapon malfunctioning. If he were carrying a semi-auto he risks the slide hitting his shield when he fires and possibly jamming.

But there’s more to this that has prompted a closer inspection of the picture, leading to questions like, “What’s with the guy in the jeans?” and “Why do the dudes in the back look so bored?”

There are even more questions surrounding the gun, itself. The Firearm Blog suspects that it is a Smith & Wesson Model 625, though one of the commenters adds that it might be a Korth revolver. Based on this grainy picture, what do you think think it is?