The Fourth of July came a bit early this year as a stray bullet accidentally ignited $30,000 worth of stored fireworks, the Kitsap Sun reports.

It all started at 1 a.m. in Belfair, Washington, when the owner of an auto wrecking yard decided to take his daughter to some late-night target practice. The bonding experience proved to be a night that the two would never forget – though probably for reasons neither one of them could have ever predicted. 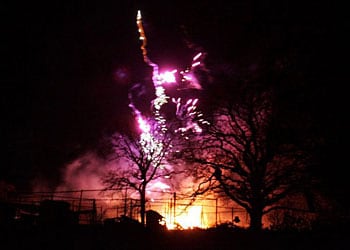 Ron Krell, the president of the company that puts on the Third of July show in Poulsbo, told the Washington newspaper that the gun owner “fired at a junk car in the wrecking yard, and the bullet must have ricocheted off that.” Mason Country Fire District 2 fire investigator Jeromy Hicks confirmed that a spark from the bullet set the nearby firework container ablaze.

You think you’ve seen a firework show? Hah! This event puts your local Independence Day celebration to shame. The ensuing explosion was heard for miles around.

Hicks said, “You wouldn’t believe the crater in the earth here from the magazine of fireworks. It woke my wife up — she thought we were having an earthquake.” The wild fireworks also set a mountain of tires ablaze like some sort of rubber volcano and sparked fires throughout the property.

The ATF had to come in and investigate the event because it involved commercial fireworks, though it is currently unclear whether or not Robert Nitz, the man who owned the fireworks, will press charges. He’s been scrambling to replace the fireworks and needs to reprogram the event to account for a few irreplaceable fireworks. Poor guy. Thirty-thousand dollars of fireworks went up in smoke, and he wasn’t even around to watch the light show.