Army wife Ashley Wise is calling for more attention to PTSD by championing the Battling Bare movement. Wise became frustrated when Army brass wasn’t paying enough attention to her husband’s PTSD needs, so she figured the best way to get some eyeballs on the problem was to take off her clothes, the Leaf Chronicle reports. 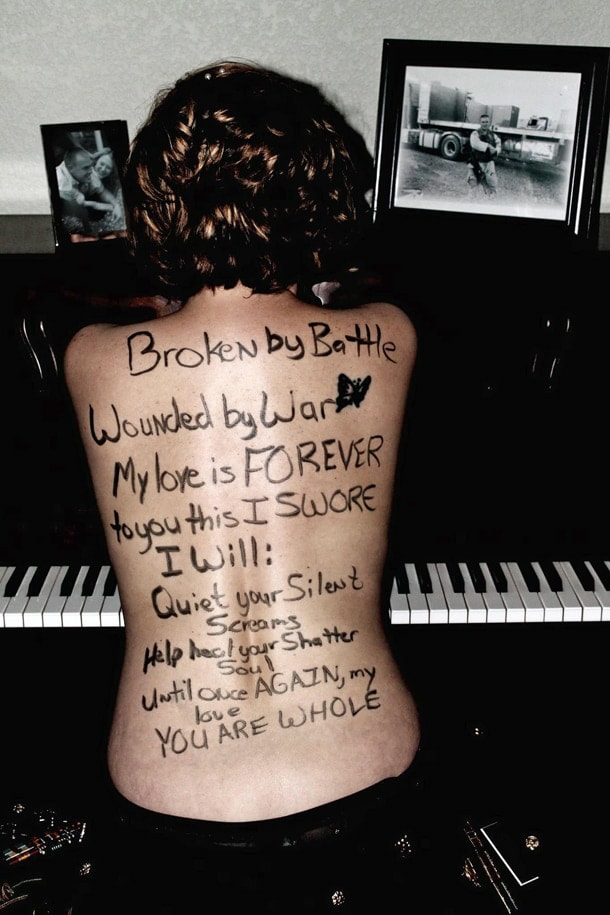 Well, let’s back up a bit. Ashely’s husband, Rob Wise, returned from an eight year military career that ended with symptoms resembling PTSD. Concerned, he went to a counselor, but the counselor simply said that he was “having trouble reintegrating.”

Rob was having so much trouble reintegrating that, as Ashley recounts, “He took all of the guns in our house, and some alcohol, and went to a hotel room.” After that frightening ordeal, the Wises went to the Army’s Family Advocacy Service, but when Rob shared his story they got an MP and hit him with domestic assault charges. How is that helping?

Ashley was so frustrated that she told her friend, “I kind of want to take my clothes off and streak across the 101st command building, because then maybe the general or someone would listen to what I’m saying.”

Well, she didn’t do that exactly, but she did the next closest thing: she stripped nude, wrote a pledge on her back, and posted photos on Facebook. Within hours, a movement was born.

Other military wives supported their husbands and the cause by sending in photos with the pledge scrawled across their backs:

Broken by battle,
Wounded by war,
I love you forever,
To you this I swore:
I will quiet your silent screams,
Help heal your shattered soul
Until once again, my love, you are whole.

So, DoD, does Ashley Wise have your attention now?

For updates, stay tuned to Guns.com. For more information on Battling Bare, visit the official website or the Facebook page and check out The Truth about Guns take on it here. For all breaking gun news, keep browsing Guns.com’s news feeds.