Russia is putting their newest AK through the wringer. The AK-12 will be the next major service rifle of the Russian armed forces, and it is currently going through evaluations before entering mass production towards the end of this year.

The AK-12 is a significant departure from the proceeding AK-74 and AKM rifles. While it still uses a stamped steel receiver, it’s hard to know what, if any, parts will be interchangeable. From the photos, it looks like the AK-12 retains just the magazine, maybe some of the fire control group and some of the sight parts.

Internally, the AK-12 is clearly different, just by looking at the safety and selector. The AK-12 has ambidextrous controls, with a four-position selector switch for safe, semi-automatic, 3-round burst and fully-automatic. The selector is a standard lever, and the ejection port cover is a separate reciprocating sleeve that closes automatically. The charging handle looks to be reversible, and the magazine release adds side buttons in addition to the paddle.

The AK-12 has a full-length topcover Picatinny rail. The dust cover has been completely redesigned and is now hinged and attached to the barrel trunnion and fixed at the rear with a levered cam that locks it in place for stability. It absolutely looks optic-friendly, with a very low-profile topcover rail and matching railed gas tube. The polymer handguard also has rails at 3-, 6- and 9-o’clock, and the gas block has a small rail on it, as well. 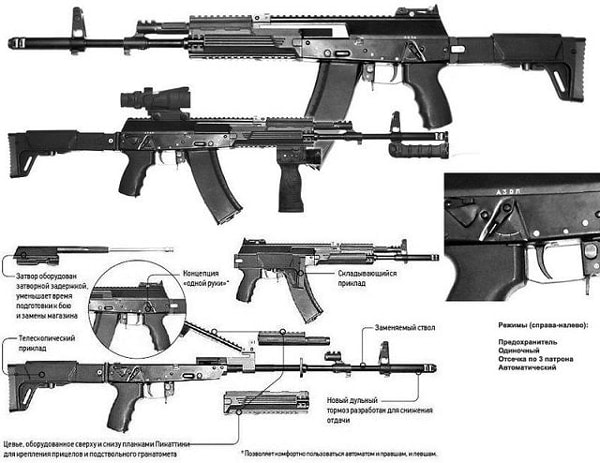 The handguard isn’t the only piece of furniture to change, as the AK-12 is getting a new pistol grip and a new buttstock, although it looks like some of the evaluation models have been fitted with standard AK-74M furniture. The pistol grip has a much more ergonomic style to it, and the buttstock appears to be a side-folder with an adjustable cheek riser. This probably helps when using rail-mounted optics that sit  quite a bit higher than the standard sight plane.

From the photos, it looks like the fire control pins have been moved slightly, corresponding with the change in the trigger angle. This could be to accommodate the new safety system. The AK-12 also uses a lengthened flash hider with a 4-port compensator. Entertainingly, one thing that hasn’t gone away is the 1000-meter adjustable elevation rear sight leaf, which has been relocated to a removable back-up iron sight block. Some things must never change.

The AK-12 will be chambered in four calibers, 5.45x39mm, 5.56x45mm, 7.62x39mm and 7.62x51mm, and is expected to go into service in 2013, after it finishes this evaluation process and the design details get dialed in. It is not known when Izhmash will begin production of AK-12 variants for civilian sale.

Izhmash, the manufacturer of the AK-12 and dozens of other military and sporting rifles used worldwide, including Saiga rifles and shotguns, was declared bankrupt by Russian investigators earlier this year. Not willing to let one of the greatest armories in the history of small arms collapse, the Russian Federation has taken over Izhmash and is in the process of restructuring it so that they will continue to be able to supply their military and the world at large with some of the most trusted firearms ever made.