The website Oh No They Didn’t! (NSFW) reports that Lindsay Lohan, the classiest of Hollywood starlets, recently appeared in a photo shoot while swallowing the barrel of handgun – and pointing it at her head, and resting her chin on the barrel.

The man behind the camera is Terry Richardson, who pays the bills by taking shots of big Hollywood names in various states of undress. He recently posted shots to his Tumblr account of Lindsay Lohan as she pointed a gun at her head. The photos were only on the blog for less than a day, but that was more than enough time for them to be permanently spread out throughout the Internet, which sees everything and forgets nothing. 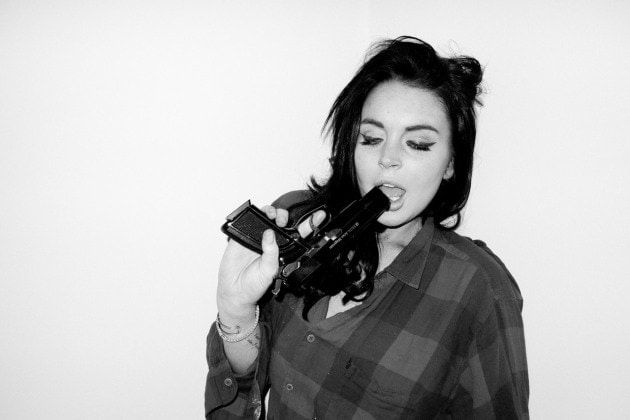 As if the suicidal implications and rampant disregard fur gun safety weren’t controversial enough, these black and white photos (that makes them classy) also include a few shots of Lohan in a sheer bra (NSFW). Elsewhere on Richardson’s site you can find gifs of super models in wet T-shirts (NSFW) and completely naked ladies (obviously NSFW).

It’s been – what – a few weeks since Lohan had last been in the news pulling some controversial stunt? This photo shoot came just in time for her monthly dose of fuel for the celebrity gossip fire. Just remember not to take a page out of Lohan’s book. Those pictures of her may be artsy-fartsy, but pointing a handgun at your head is just flat-out dumb.