Students in the Youth Education Summit (Y.E.S.) learned a bit about guns and history when they took a guided tour through the National Firearms Museum, NRA Blog reports. For those of you who aren’t 16 and haven’t heard of Y.E.S., it’s an NRA-run organization that promotes awareness of guns, the federal government, and the Constitution among teenagers. And what better place to do that than in a museum filled with some of the nation’s most historic guns?

The tour began the legendary Robert E. Petersen Gallery, which holds some of the most rare and impressive firearms from around the world. From there, students went through a gun time machine, tracing the evolution of guns from flintlock and black powder firearms to the finely-tuned precision weapons of today. 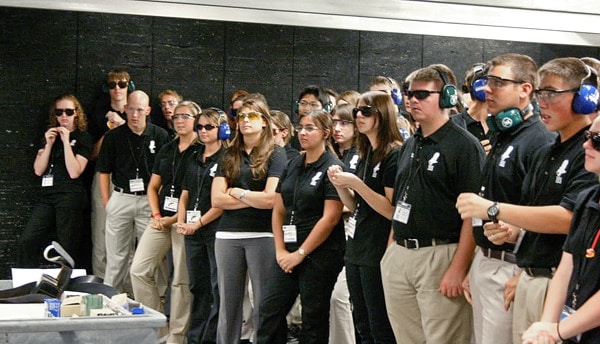 The experience wasn’t lost on the Y.E.S. teens. One of the students remarked, “I can’t believe this is in the ground floor of your building. I’m already thinking of planning a trip to come back.”

As great as marveling at unique firearms is, there’s one thing that always beats it out: shooting them! The Y.E.S. tour ended with a trip to the shooting range where the students got a chance to squeeze off a few rounds and get some hands-on learning.

Why didn’t we have classes like that when we were in school?