MasterPiece arms, manufacturer of Defender MAC (Ingram)-style pistols and carbines, has announced a new carbine chambered in 5.7x28mm, the Defender MPA5700sst, the high-velocity pistol and submachine gun cartridge developed by Fabrique Nationale. This follows the release of a Defender pistol chambered in the same caliber early this year, the MPA57sst.

The Defender is loosely based on the MAC (Millitary Armament Corporation) M-10, also known as the MAC-10. It makes some changes to the design to modernize it, specifically moving the top charging handle to the left side of the receiver and replacing it with a Picatinny rail for optics. It maintains the indestructable adjustable M-10 iron sights.

The grip of the MPA5700sst carbine is far removed from the original designed by Ingram. It’s an angled grip designed to accept standard FN Five-seveN magazines; it ships with one 20-rounder but will also accept aftermarket 30-round magazines.

Fitted with a low-profile tube-style AR fixed buttstock and aluminum quad-rail handguard, the MPA5700sst is ready to go for any accessories you could want on a 5.7x28mm carbine. It also features a custom muzzle device, a combination flash-hider/compensator. The barrel is threaded ½×28 for other muzzle attachments, and gives the MPA5700sst an effective range of about 200 meters. 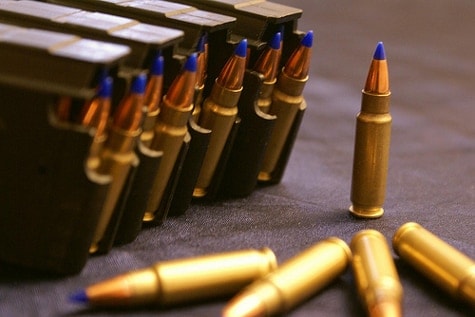 Other specifications of carbine are that it has a 16-inch barrel, and overall length of 34.5 inches and it weighs about 6.5 pounds unloaded. The MPA5700sst has an MSRP of $795 and should retail for around $600-650, which is a huge savings over an FN PS90 bullpup, and a good thing when you’re an enthusiast of the not-particularly-budget high-speed low-recoil 5.7x28mm cartridge.

The MPA57sst is also considerably less expensive than a Five-seveN pistol, with an MSRP of $600, which is less than half of the Five-seveN’s MSRP of $1316.

MasterPiece Arms’ guns ship in a custom gun case and have a lifetime warranty. \