Palmetto State Armory, a company that creates quality AR-15 rifles and AR accessories, has just announced on its Facebook page that that the company will be making “NOBO12” AR-15 lowers (No Barack Obama 2012).

The targeted buyer demographic for this lower, it seems, are gun owners who are concerned about the future of gun rights if Barack Obama is reelected as president. The design features a number of phrases from Obama’s first election campaign, including “Yes we can” next to the serial number, “Hope” next to the safety, and “Change” for fire.

Palmetto State Armory apologized that they do not have any pictures of the actual product to post at this time, but this drawing should give buyers a good idea of what they can expect. We’ve got no problem with this lower – or any gun part that has a political slogan written across it, for that matter. After all, using your personal firearm to express your beliefs is kind of like a two-in-one Amendment deal. 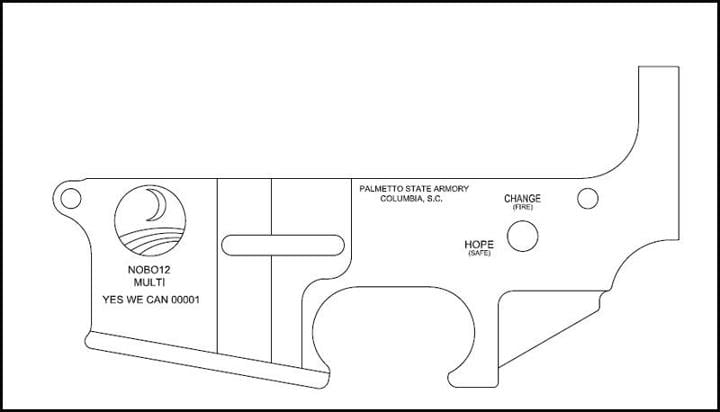 It’s just that of all the things PSA could have put on their AR lowers, why fill it with the campaign slogans of the guy they’re supposedly against? Wouldn’t it be better to engrave it with “Vote Republican,” “Stop Obama,” or even, “No Obama 2012?” As it is, this gun part almost looks more like an advertisement for Obama rather than against him.

After all, if you didn’t know from this article what “NOBO12” stood for, would you have viewed this lower as pro- or anti-Obama?