Gunnar, a former US Navy seal, has died at the age of 38, AFP reports. 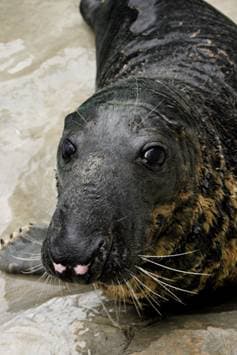 Just to be clear, we’re talking about the little brown creatures that do tricks for fish, not the special ops guys who carry around rifles and jump out of helicopters into the ocean. Though, we suppose that Gunnar probably could have done those things, too, if the Navy had given him a chance.

You see, Gunnar’s not your average, run-of-the-mill seal. Rather than teaching him how to push a ball around to impress an audience of onlookers, the Navy’s Marine Mammal Program specially trained Gunnar to perform deep-sea tasks during the Cold War. The zoo described his impressive resumé: “In his career as a Navy seal, Gunnar learned how to insert and remove equipment, use a screwdriver and turn a large wheel valve.”

For serving in the line of duty, Gunnar earned a sweet retirement deal and has been kicking back at the National Zoo in Washington, DC. He then became the proud father of two bouncing baby seal daughters, Kara and Kija, that are currently swimming around in a New Jersey aquarium.

Tragically, Gunnar passed away Tuesday. There is currently no word as to whether or not the other animals at the zoo will be holding a memorial service.